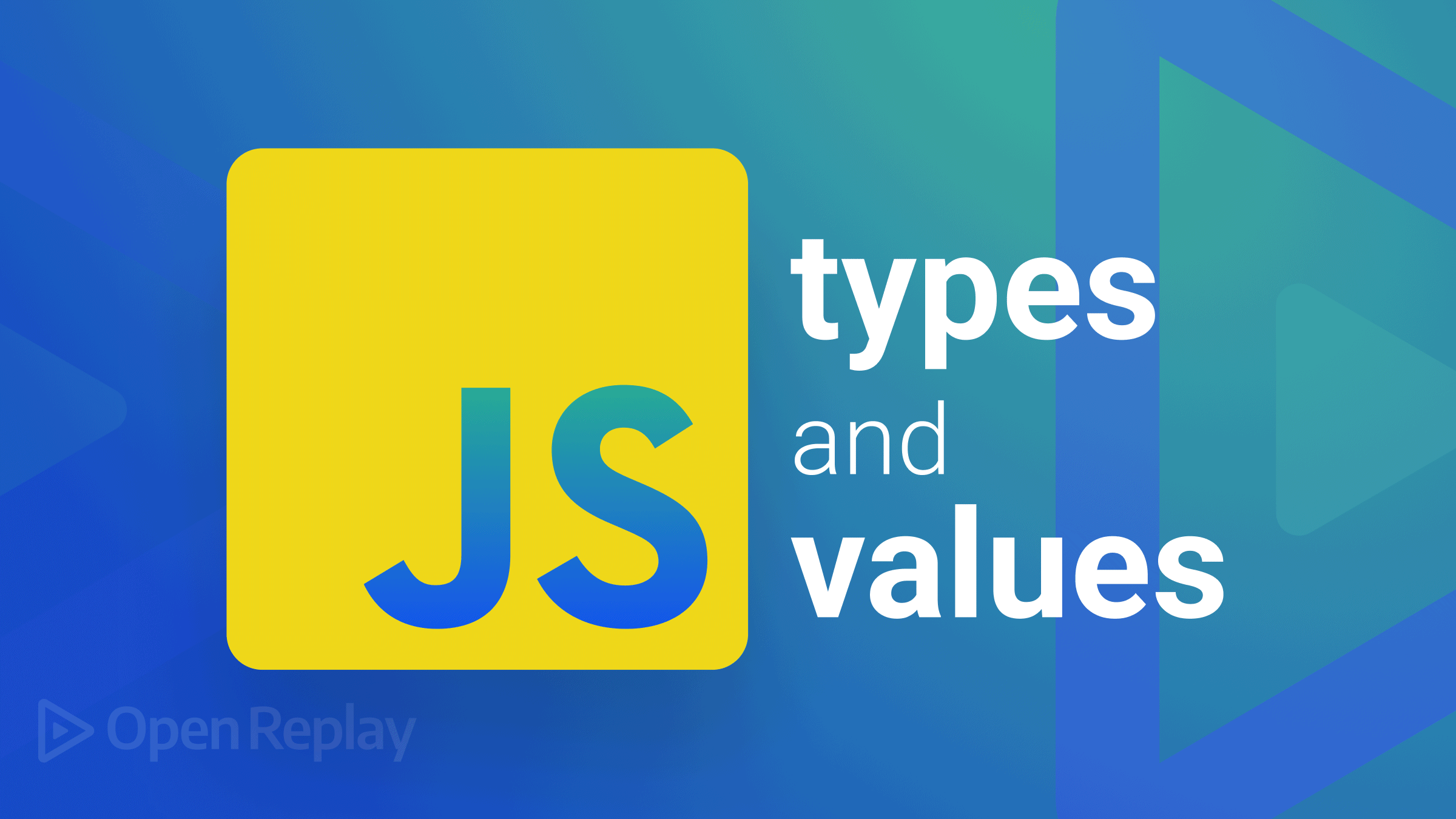 Javascript is a dynamically typed language, which means variable types are identified at run time (done implicitly by the interpreter), unlike statically typed languages (like Java and C++) in which the developer has to explicitly define the type for each variable declared.

In a programming language, values that can be represented and manipulated are known as types. Types are labels given to data to enable the computer to make sense of it (at low level, computers see everything as data (1s and 0s)).

It is one of the core characteristics of any programming language to have a set of types it supports. There are two kinds of type in Javascript: primitive type and object type.

In this article, readers will learn the following:

In a programming language, a variable is like an empty container, in the sense that it is used to store different types of values. 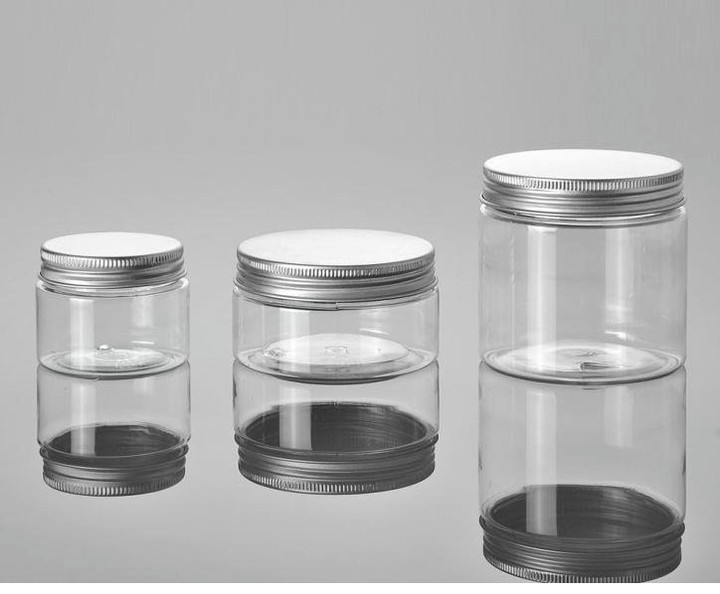 TYPE VS VALUE IN JAVASCRIPT

The preceding statement means that each Javascript type has a specific kind of value (s) it accepts. For example, different types of sports have their own specific rule (s). In the same way you can’t score a basket (basketball rule) in soccer, a string value can’t be stored as a Number type in Javascript.

In Javascript, a Primitive type is a data type with an immutable value.

Null is a Javascript keyword customarily used to indicate the absence of a value. Null is regarded as the only member of its type (Null type), and it can be used to indicate “no value” for strings and numbers as well as objects.

When the typeof operator is used on null, the string “object” is returned. This was actually a mistake in the early Javascript implementation. It is advisable to use the strict operator === instead of typeof when type checking a null value.

Null can also be regarded as a special object value that indicates “no object”.

In the preceding code, the greetingObject variable is assigned a null value after it was initially assigned to an object. The null value means that an object is expected to be assigned to a variable, but it’s not assigned for some reason. This is also the case when a function returns a null value.

The undefined is used to indicate the absence of a value in JavaScript, just like null.

An undefined value is returned:

The undefined value is the sole member of the Undefined type.

JavaScript can also implicitly convert other types of values into booleans (truthy and falsy values).

The String type is used to represent text in Javascript. However, a string value is an immutable sequence of 16-bit values, each of which represents a Unicode character.

Important things to know about strings:

Numeric types are used to represent numbers in Javascript.

There are two Numeric Types in Javascript:

This is Javascript’s primary numeric type. A number value can be in the form of an integer (20) or a floating-point number (21.5). NaN and Infinity are also considered to be number values in Javascript. The NaN (Not a Number) value is technically a non-numeric value a statement can evaluate to. However, the Infinity value represents the mathematical infinity (something larger than the natural number). They are both global constants (properties of the global object. e.g., the window object in the browser).

The BigInt Type was added in ECMAScript10 (ES10). It is a numeric type whose values are integers. It was included in JavaScript mainly to allow the representation of 64-bit integers, which are required for compatibility with other programming languages and APIs.

Before ES10, the maximum number value created in Javascript used either the number literal or the Number () constructor and was stored in the Number.MAX_SAFE_INTEGER, which is equal to 9007199254740991. However, with the BigInt type, we can specify numbers greater than Number.MAX_SAFE_INTEGER. BigInt values can have thousands or even millions of digits.

A BigInt value can be created by using the BigInt (number) function or appending n to the end of an integer value.

The Symbol is a unique and immutable data type introduced in ECMAScript6 (ES6) to serve as a non-string property name for objects. Before ES6, property names of objects in Javascript could only be strings, but with the Symbol type, we can also specify property names as Symbols.

Symbols are not enumerable, that’s the reason it can’t be accessed using the Object.keys () method on an object that uses it as a key.

In the preceding code, a symbol first_name is created using the Symbol () function and used to assign a new property to the person object. The Symbol function also accepts an optional argument that is a description of the symbol. However, the description can’t be used to access the property, and it is a good practice to always provide a description to make reading and debugging easier.

Every Symbol is unique; two symbols can never be equal to each other.

In the preceding code, two identical Symbols, first_symbol and second_symbol, are created; even with the same descriptions, they are both unique and different. Learn more about Symbols here.

According to the JavaScript Specification

An Object is logically a collection of properties.

An Object can be seen as a composite value, made up of multiple values (primitive values and other objects), and allows you to store and retrieve values by name. The values collected by an object are known as properties.

An object’s property (property value) is the core part of any object, and it is made up of a name (key) and a value. Property names are usually strings (they can also be Symbols) mapped to a value.

There are two object properties: The data property and the accessor property.

In the preceding code, the job and id properties of the data_object object are called Data Properties. This is the default way of creating object properties in JavaScript (As seen in most Javascript code).

An accessor property is an aggregate of two functions: the get and the set function. It associates a property name (key) with two accessor functions (get and set) to fetch or store a value.

The get function is called a getter since it is used to get the value of an object property. if the accessor_object is updated like this accessor_object.job = 'developer', the update won’t work. This is because we need a corresponding setter function for the job property. Setter functions are used to set values in an accessor object.

In the preceding diagram, the property descriptor of the object contains various property attributes of x and y' (object` properties).

You should know what they are from the name’ built-in’ objects. Built-in Objects are simply objects that come with Javascript by default, which enables you to implement various functionalities in your application.

There are various built-in objects (check here), but in this article, we will look at the following:

As defined by MDN

These are the fundamental, basic objects upon which all other objects are based. This includes general objects, booleans, functions, and symbols.

Example: When you create a “normal object”.

These are the base objects representing numbers, dates, and mathematical calculations. - MDN

Let’s look at the Math Object: The Math Object allows us to carry out mathematical operations in Javascript, through its various methods and properties.

For example, if we want to find a number’s square root, we will use the Math.sqrt (x) method.

These objects represent strings and support manipulating them: String and RegExp.

Arrays are ordinary objects with integer-keyed properties. It is an ordered collection of values. Each value is known as an element, and each element has a numeric position in the array, known as its index. An array also has a length property that can be used to retrieve the number of elements contained in an array.

Typed Arrays were introduced in ES6, primarily designed to work with numeric types. Typed arrays are technically not arrays (Array.isArray () returns false for them), but normal array methods can be used on them.

The difference between Typed arrays and Arrays are:

The following 11 Numeric types can be stored and manipulated in a Typed Array:

These objects represent collections which use keys. The iterable collections (Map and Set) contain elements which are easily iterated in the order of insertion.

The Javascript engine stores values differently in memory—the stack and the heap.

In the preceding code, because the string and number primitive values are stored in the variables company_name and company_age, the variables will be stored on the stack by Javascript. 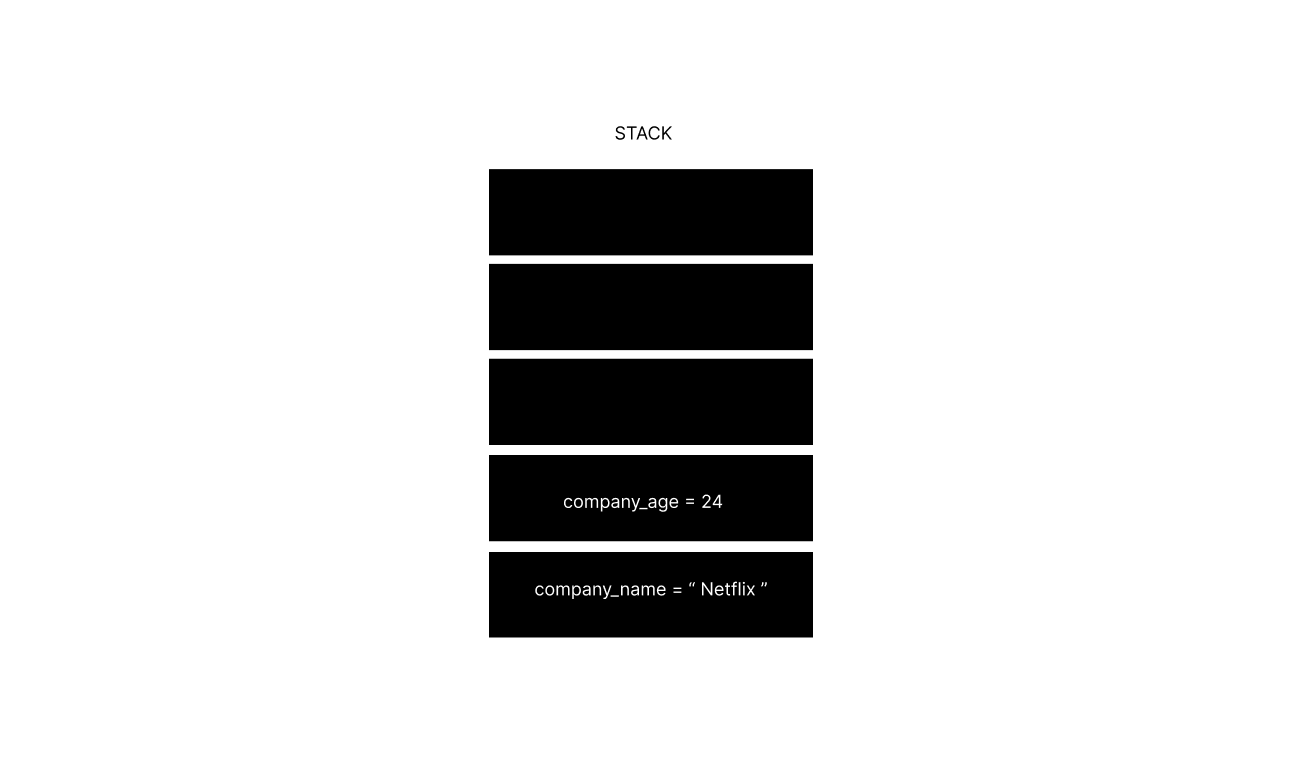 Now let’s create an object that will be stored on the heap. 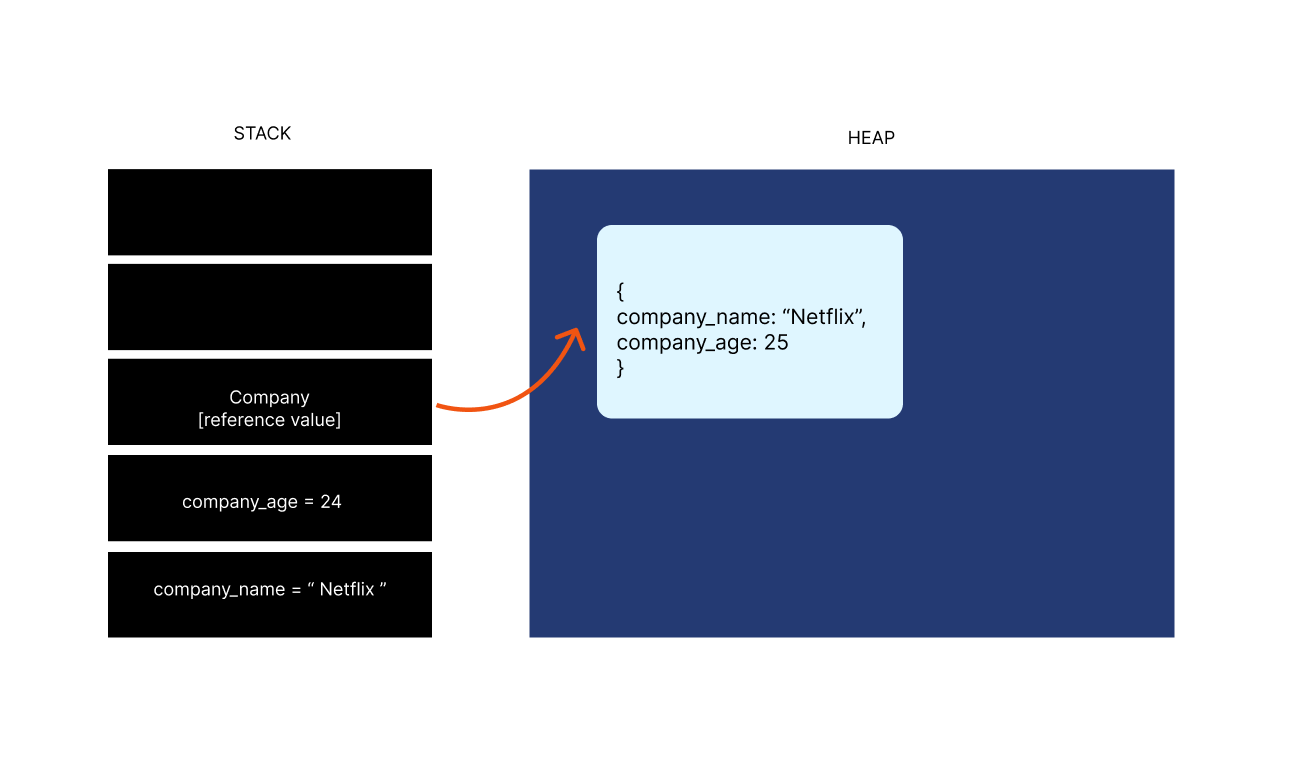 When a primitive value is assigned from one variable to another using the = operator, the value is said to be copied to the new variable.

In the preceding code:

Under the hood, Javascript creates a copy of the primitive value “John” and assigns it to the new_name variable. 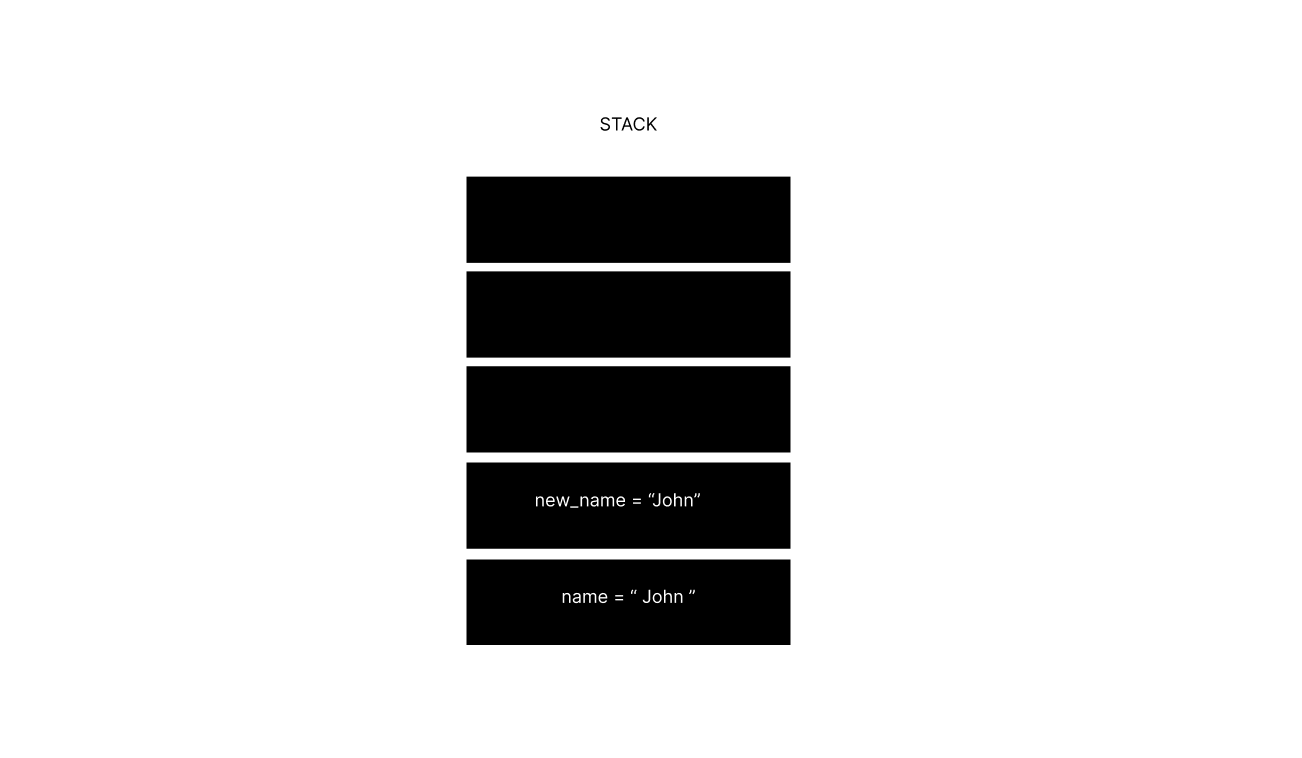 When a reference value of an object is assigned from one variable to another, both variables will refer to the same object on the heap memory. This means changes made to one variable will affect the other.

In the preceding code: 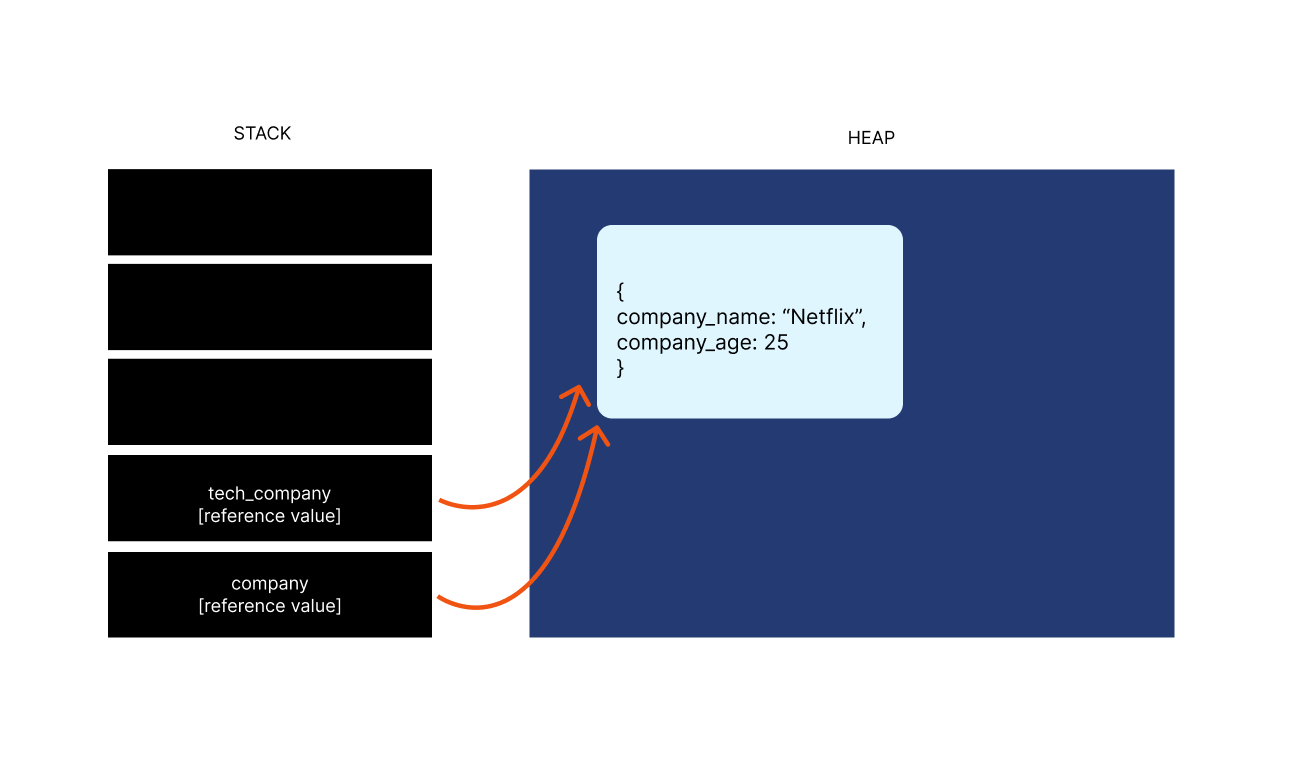 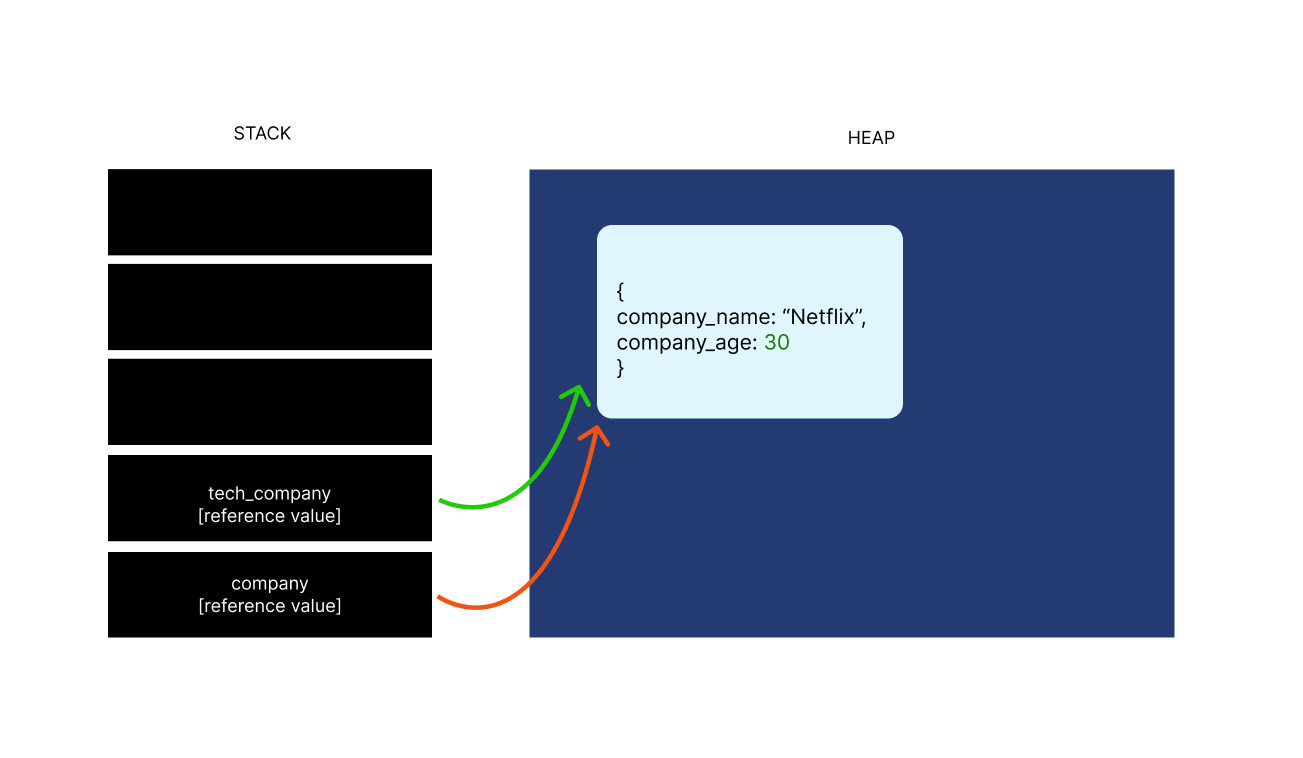 Now you know about the types and their various values in Javascript, you will be more aware of how you use the various types and values when using Javascript.

In this article, you learned the following:

Learn how to use the powerful EJS templating engine

How to add an introductory set of screens for new users