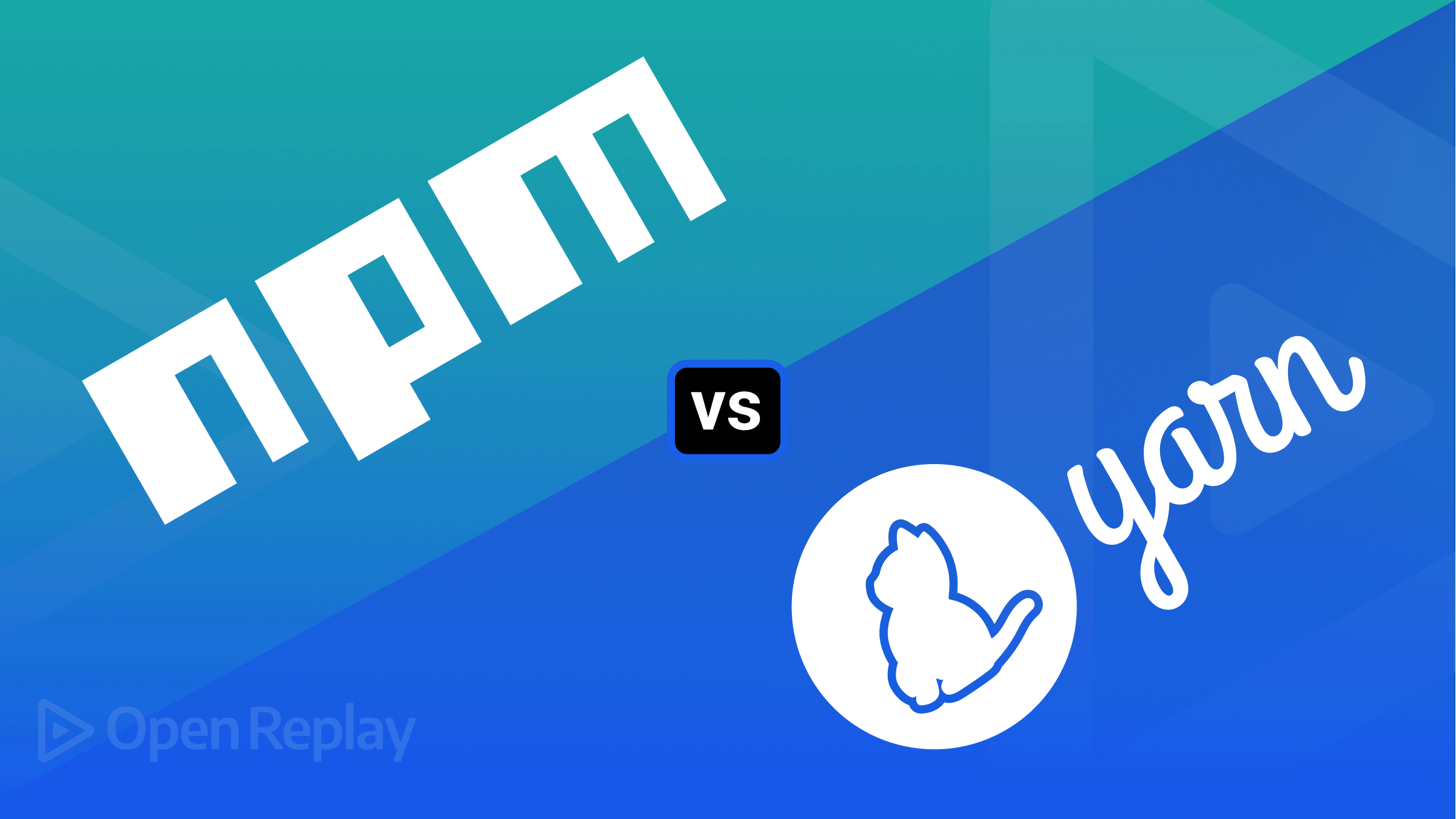 When working with NodeJS, developers often struggle to choose the best package manager for their project. Even a small project today has hundreds of complex scripts and even more complex dependencies, which are practically impossible to handle without some automated tool. Package managers emerged as a blessing for the developers, helping them automatically handle project dependencies, a piece of code a project requires to function correctly.

NPM and Yarn are two of the most popular package managers extensively used for JavaScript coding. They work with Node.js, allowing developers to build and run JavaScript code outside the browser. With the help of these package managers, you can seamlessly install, update, build, use and share packages, run scripts, configure project settings, and so on. Simply put, package managers do all the hard work on your behalf, allowing you to focus on the core part – the coding itself.

Although both package managers share many similarities, there are several differences between them. In this article, we will compare them side by side, so you can choose the one that best suits your requirements. Before we start the comparison, let’s get basic information about both package managers.

Released in 2010, Node Package Manager (NPM) is a renowned package manager among JavaScript programmers. When you install Node.js, this package manager is installed by default in the system. NPM includes three major components – a website to manage many aspects of the npm experience, a CLI (Command Line Interface) to interact with npm through the terminal, and a registry to access a massive public database of JavaScript packages.

Before NPM, project dependencies were installed and managed manually. But, the introduction of npm took the web to new heights. NPM is commonly used to build, install, publish and locate Node programs and dependencies in your application.

Yarn (Yet Another Resource Negotiator) is another popular package manager that was released by Facebook in 2016 for JavaScript programming language. Just like npm, Yarn allows developers to use and share code with the community of developers. Meaning, that it makes it easier for you to develop software by allowing you to use the programs already built by other developers.

However, the main goal of introducing Yarn was to overcome the performance and security issues with npm. As soon as Yarn was released, npm underwent several improvements and implemented several features to repair some of its inefficiencies. Yarn quickly secured its position as a fast, stable, and safe JavaScript package and dependency tool.

The performance of the package manager is an important factor to consider when dealing with many packages. Whenever you install npm or Yarn package, they execute several tasks. NPM carries out these tasks in sequence, meaning it will not jump to the next before the current package is installed completely. On the other hand, Yarn conducts these tasks simultaneously, increasing the performance.

When it comes to caching mechanisms, Yarn seems to perform better. Yarn has a zero-install feature that allows you to install dependencies offline without delay. As Yarn was designed to fill the performance gaps in the npm, Yarn was a winner in terms of performance. However, with recent updates in npm, its performance is coming close to that of Yarn.

Yarn and NPM both share some common fundamental features.

Creating lock files: Both package managers create a version lock file automatically that keeps track of all the dependencies used in the project. The file is known as yarn.lock in Yarn and package-lock.json in npm. The lock files are essential in ensuring the same file structure is maintained throughout all environments. NPM didn’t have this feature when it was initially introduced, while Yarn included this feature in its first release. Later, NPM introduced this feature in version 5.

Support workspaces: NPM and Yarn both offer workspaces that allow you to have one single repository to manage the dependencies of various projects. Some features are exclusive to Yarn.

Plug’n’play: After the introduction of Yarn version 2, it no longer creates a ‘node_modules’ folder. Instead, it creates a .pnp.cjs file that maps packages on the disk with the list of their dependencies. This feature enhances the dependency tree and boosts package installation and project start-up speed.

Zero-installs: Zero-installs feature works in conjunction with Plug’n’play that stores the cache in the project directory. The .pnp.cjs file created will allow you to map packages in the offline cache, making it easy to access and install project packages with almost zero latency.

License checker: NPM does not come with a license checker, whereas Yarn comes with an inbuilt license checker that verifies the authenticity while downloading and installing packages. You can use the following code to see the license.

The commands are vital for any project as developers spend a lot of time learning those terms. Yarn and npm share common commands that make switching between these two easy. However, some distinct commands can confuse. One significant difference between Yarn and npm is that yarn has a ‘why’ command, which is absent in npm. The ‘why’ command denotes the role of a specific dependency in the project.

Let’s have a look at commands between NPM and Yarn.

Security was one of the serious concerns in the earlier versions of npm. But, as of version 6, npm does a security assessment while installing a package to detect any vulnerabilities and to ensure dependencies are compatible. You can also manually run a security check on the installed packages using ‘npm audit’ command. If npm finds any vulnerabilities, you can fix problems using the ‘npm audit fix’ command.

In Yarn, a security check runs in the background while downloading packages. Using package license information, Yarn ensures that no dangerous scripts are downloaded and cause dependency issues.

How to Choose the Right Package Manager?

We just went through the similarities and differences between Yarn and npm. Now let’s take a quick look at their advantages and disadvantages.

Both package managers have pros and cons, making it challenging to decide on a clear winner. However, choosing the right package manager depends on your project requirements and end goals.

As a general rule of thumb, you can go for npm if you are satisfied with the current workflow. It doesn’t require a lot of storage space and delivers a decent user experience. But, if you wish to work with great features, such as Plug’n’Play, have enough storage space, and need features missing in npm, then go for Yarn.

As npm was introduced before Yarn, Yarn took a lot of cues from npm and overcame its flaws. Similarly, npm continued to improve its capabilities with each new release to get on a par with Yarn. Both are efficient in keeping project dependencies in control and have their own advantages and drawbacks. Hence, the best package manager is the one that fulfills your requirements.

Step 2 After that, delete the ‘node_modules’ folder that lies in your project’s root directory.

Step 3 Then, install Yarn by following the installation instructions.

Yarn will start downloading all your dependencies and generate a new ‘nodes_module’ folder of your project. Yarn will also create a ‘yarn.lock’ file in the project directory to ensure you get the same dependencies.

There is no end to the NPM vs. Yarn debate, but we hope now you have a better understanding of what both package managers offer and what they are capable of. Since project development is crucial, you need a tool that doesn’t let you down. So, if you are unsure which is right for your particular requirements, try them both and see which delivers better performance.

A TIP FROM THE EDITOR: Independently of whether you use npm or yarn, study how to structure a front-end project by reading the React Architecture Patterns for Your Projects and Structuring a React project functionally articles.