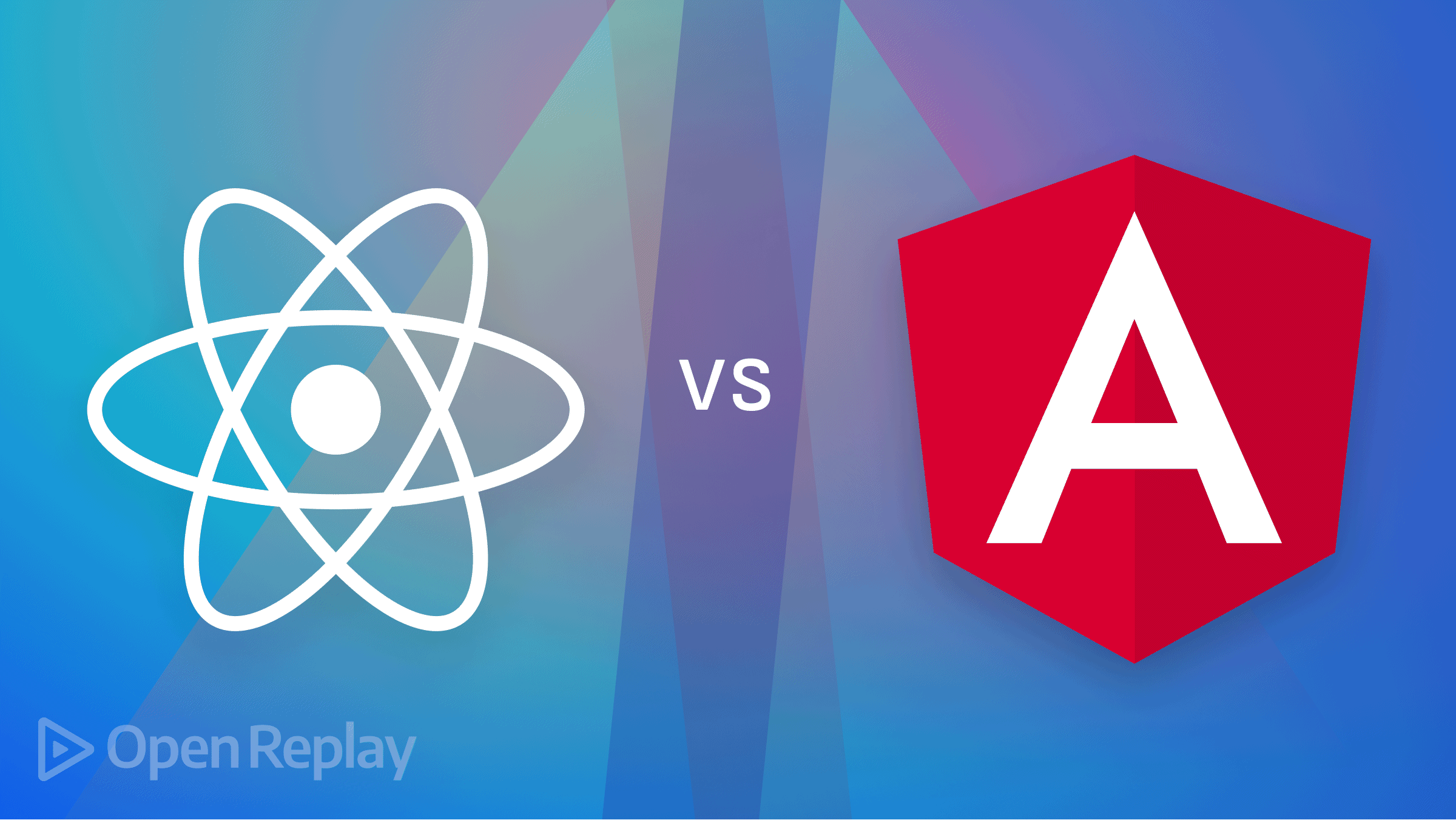 For web application development, both Angular and React are employed. React has grown exponentially, whereas Angular has already established itself as a dominant web framework. Angular is a complete framework with an MVC design, and React offers many cool features that make it easy to utilize for lightweight applications. Before we get into the fundamental differences, let’s better understand both.

The following are some common React features:

Let’s look at some of Angular’s features:

What are React and Angular used for?

React has a few key characteristics that set it apart from Angular:

Let’s go over some of Angular’s key benefits:

In React, developers can use JSX to render HTML within JS. However, if the component becomes immense, such as form validation, the code may become complex to debug, particularly for beginners. Furthermore, React is limited to UI and does not provide end-to-end workflow.

Angular provides components, dependency injection, and other sophisticated features are available. For beginners, though, this makes it tough to learn. Learning and implementing concepts in a project takes time.

Let’s recap the fundamental differences between Angular and React before we address this question:

With the aforementioned distinctions in mind, we feel that both Angular and React are viable options for single-page applications. If your application is vast and has many validations, routing, and dependencies, Angular is a fantastic choice because the code can easily be tested. If your application requirements are simple and focused on small components, Angular can be overkill with all of its features. Furthermore, React has a shorter learning curve. Make a decision based on the project’s specifications, cost, and usability.

Although we’ve discussed the benefits and drawbacks of both frameworks, we haven’t discussed the main reason we’re here: to compare React and Angular to see which is the best JavaScript framework for developers to use. Angular is typically used to create complicated enterprise-grade apps, whereas React is used for creating UI components in any app with regularly changing data. More features distinguish Angular and React fundamentally; therefore, we’ll need to establish a common ground to compare the two.

Note: Every piece of data shown below is derived statistically from stateofjs.com, which conducts a yearly survey of thorough investigation, research and observation.

Change Over Time Each line in the graph below represents a date range from 2016 to 2020. A point to the right indicates that such technology has been used by many people who want to learn how to use it.

If you look at the chart, you’ll notice that React is at the top right side of the board, indicating that more people have used it and are interested in learning it, whereas Angular is on the left side of the board, which isn’t terrible but not as good as React.

The consumer satisfaction ratio ranks libraries in this graph (percentage of users who would use a library again). And, again, React takes the lead with 84 percent of the vote, while Angular comes in second with 45 percent. 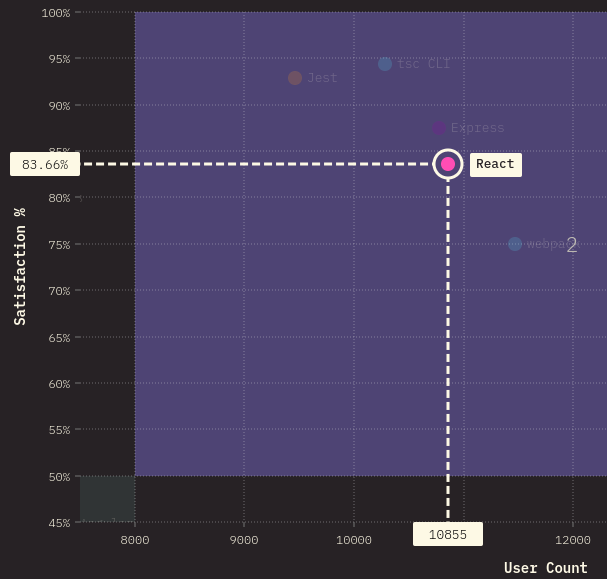 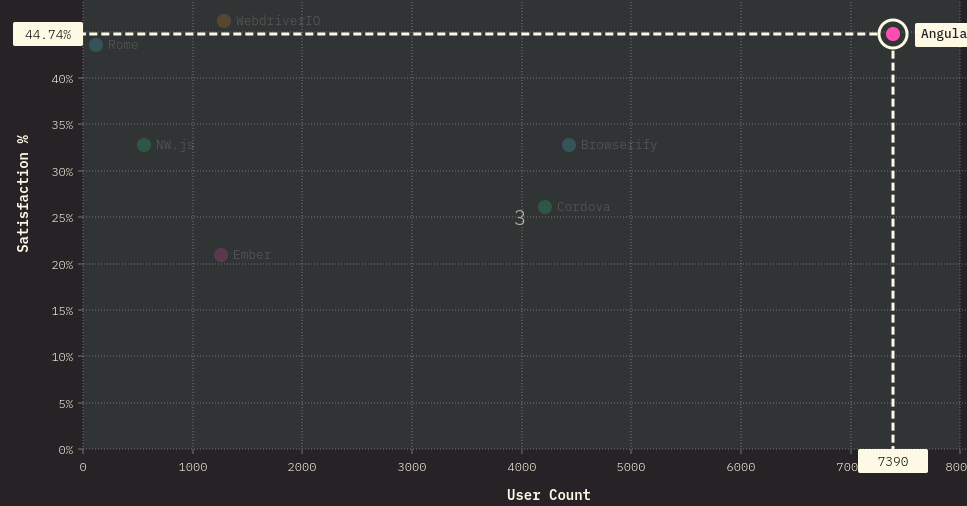 Let’s look at how React and Angular have influenced the world through their critical applications. 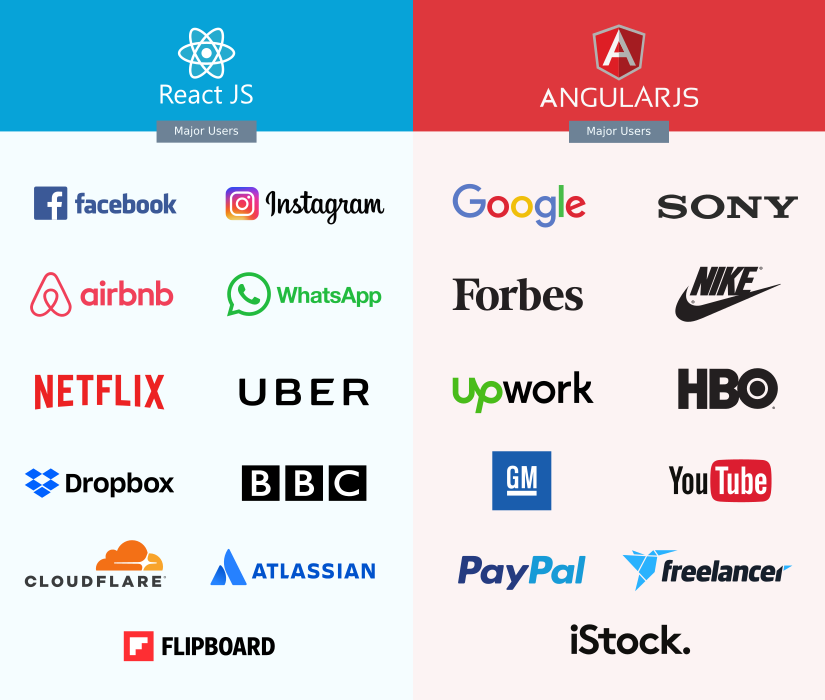 It may interest you to know that both React and Angular are prominent frameworks that have made significant contributions to our modern world through the applications produced with them. 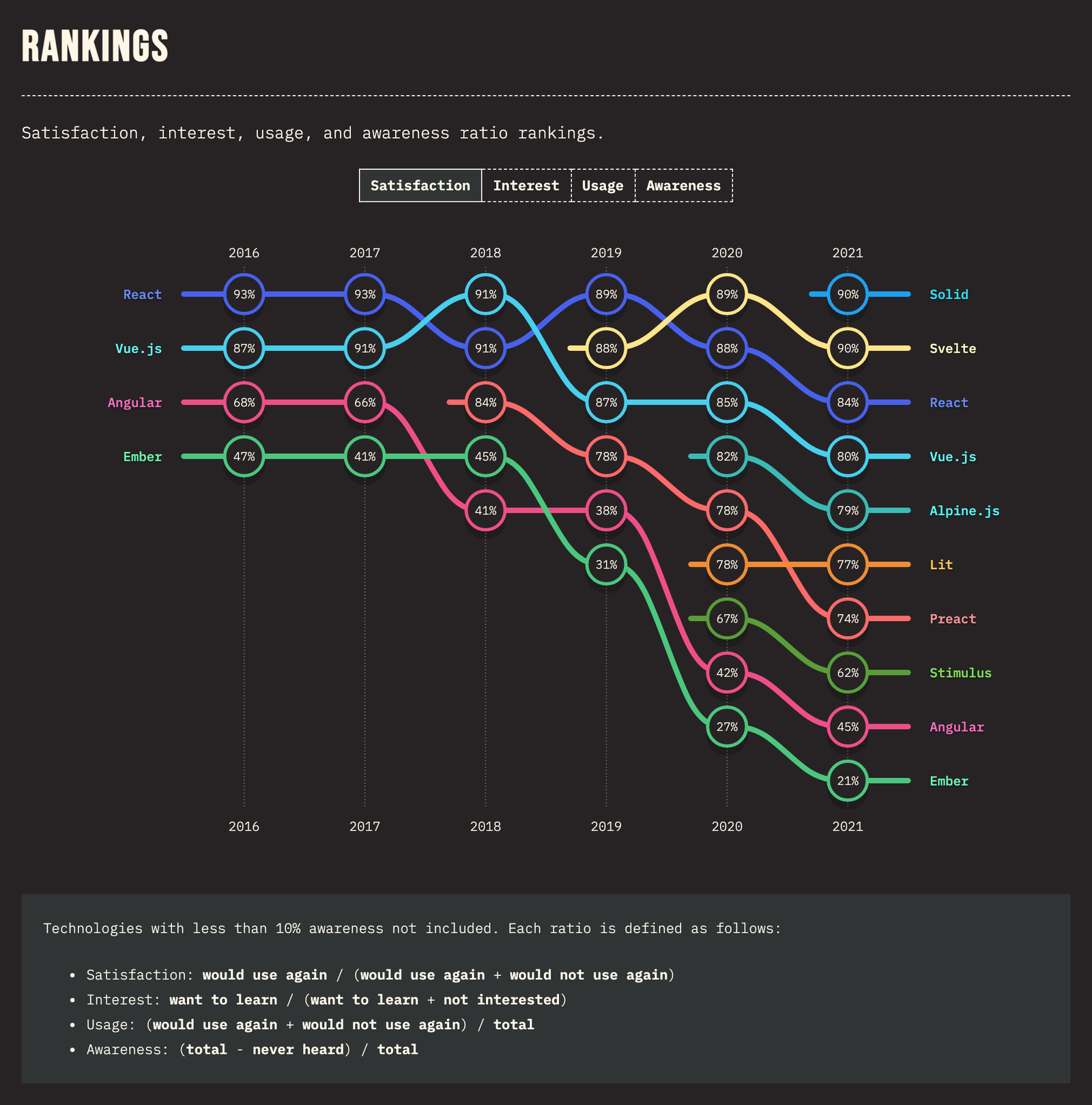 Overview of opinions on the technologies surveyed over time.

To summarize it all, we will draw a table for the basic specifications of React and Angular.

Building the same app with both

We’ll be creating an example project in which we’ll be able to observe how React and Angular handle state, routing, and maintaining high-quality code.

We’ll begin by installing our React app for this project, which will require running a few command lines: 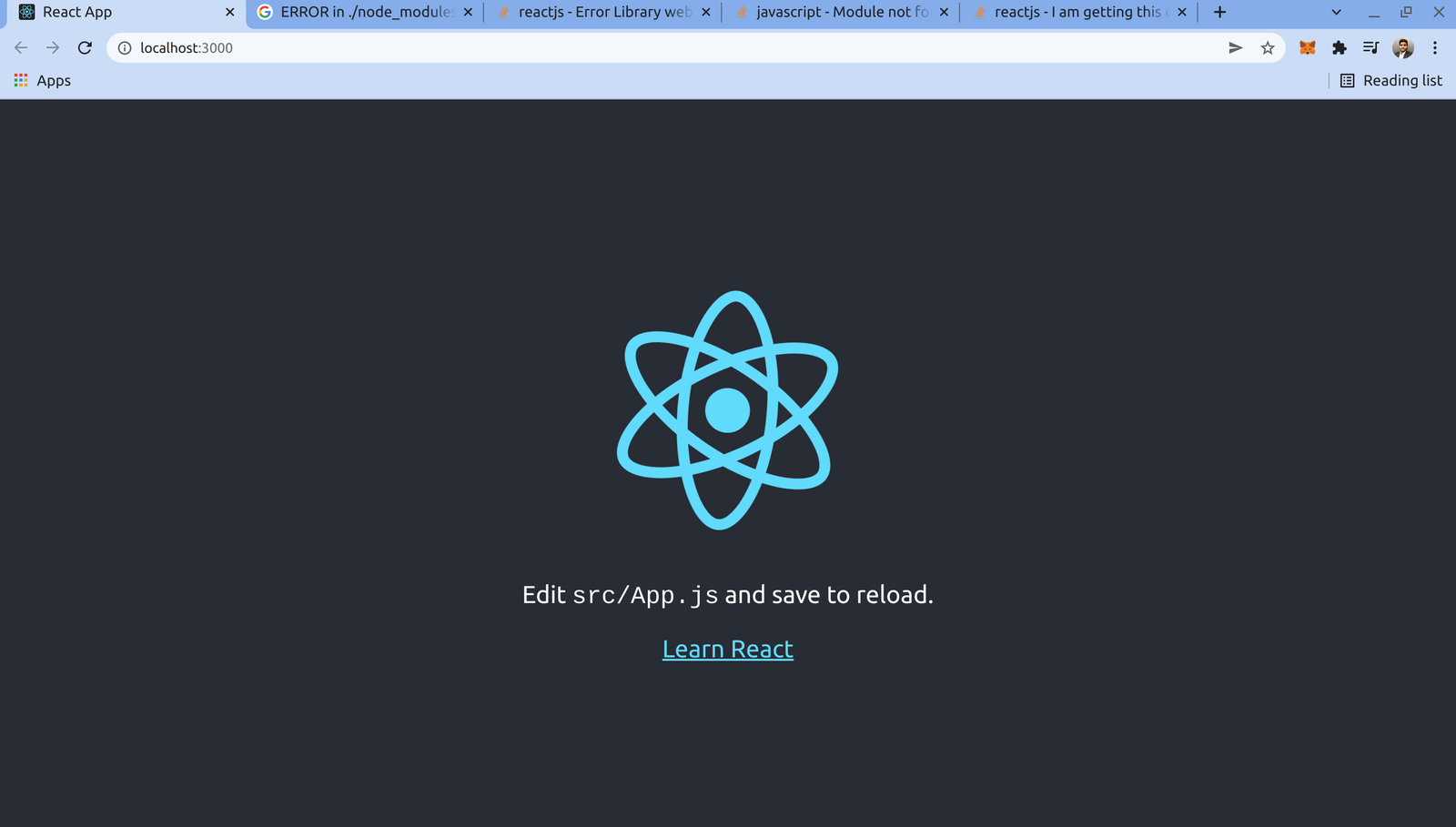 React is so simplified that we just have to return the value of the function. The return value is in JSX (Javascript Syntax Extension), which looks like HTML but has been extended with an additional syntax allowing you to insert javascript into HTML.

For the Todo-app we define a reactive state on the component with the useState hook(the hook is just a function that will return to us with two values). The first item of the value is the todo list; reactive state means anytime the state is updated, the UI will re-render to show the latest state. The second item is a function to update the state.

Now we move on to App.js and define our state functions.

To get our Angular project app to operate, we need to set up our workspace, which requires installing the Angular CLI, creating a workspace, and launching the app. The Angular CLI is used to create projects, produce application and library code, and carry out development tasks, including testing and deployment. To begin, run the following command: 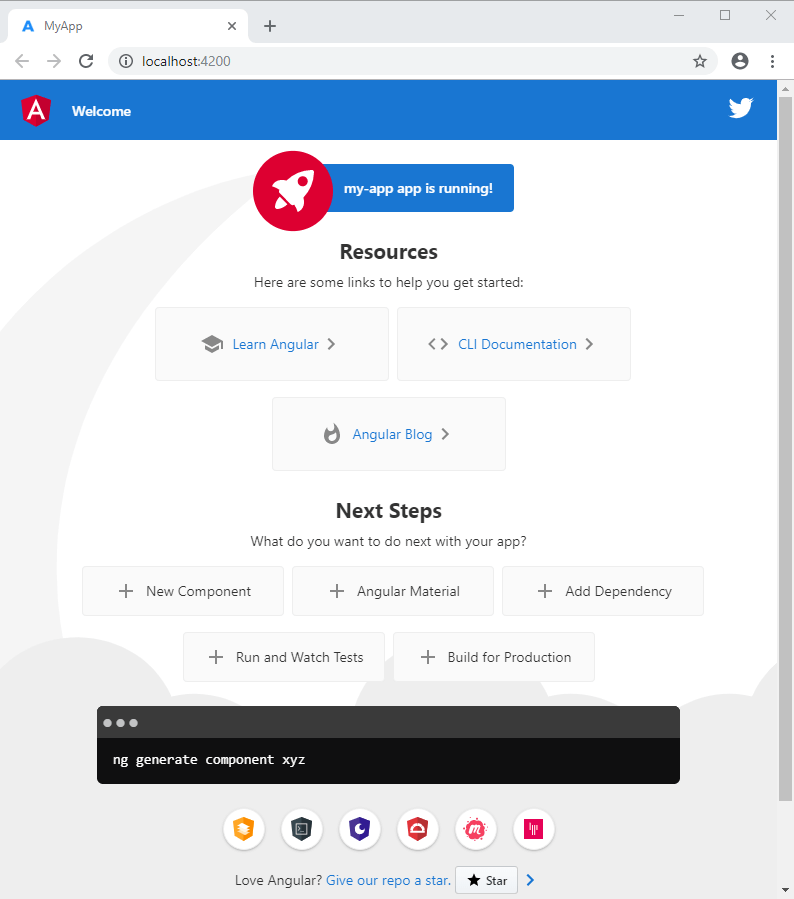 Angular, unlike React, has strong opinions about how a project should be organized and structured. It includes officially supported routing, animation, and server-side rendering frameworks. Also, React implements its HTML to Javascript, whereas Angular does the opposite and brings Javascript into HTML.

Add logic to the App Component

Although we can describe our whole component in the app.component.ts file, most angular apps split components into three files: one for Typescript, one for HTML, and a third for CSS. To add a reactive state to a component, define a property on the class and then define a method on the class to update the state. We can also manage the component’s lifecycle in the class by implementing unique methods like ngOnInit, which will be called whenever the component is first initialized.

Add HTML to the App Component

Replace the contents of app.component.html with the following to displace the objects in the browser:

We built a form tag in the code block above. The form tag takes in an input and a submit event; if the event is clicked, it calls the add todo method to receive the actual value from the form input. We can use the ngModel to do two-way data binding, which ties the form values to the class’s todo text property.

To use this property, we’ll need to go into app.module.ts and import the angular FormsModule because it’s essential for that command to work; else, you’ll get an error, so let’s do it with the following code:

While Angular is a full-fledged development and testing framework, React merely allows developers to create user interface components for their apps. Also, React is lightweight and appropriate for mobile native and Single Page Applications, with its increasing popularity. Angular is a well-known framework for building SPAs and big apps. This article covers the comparison between React and Angular, both as frontend framework libraries from Javascript. So far, both parties have shown their importance to the tech ecosystem.

Even when the code is open and accessible, companies have multiple ways to earn income from their projects. Here are 6 of those strategies.