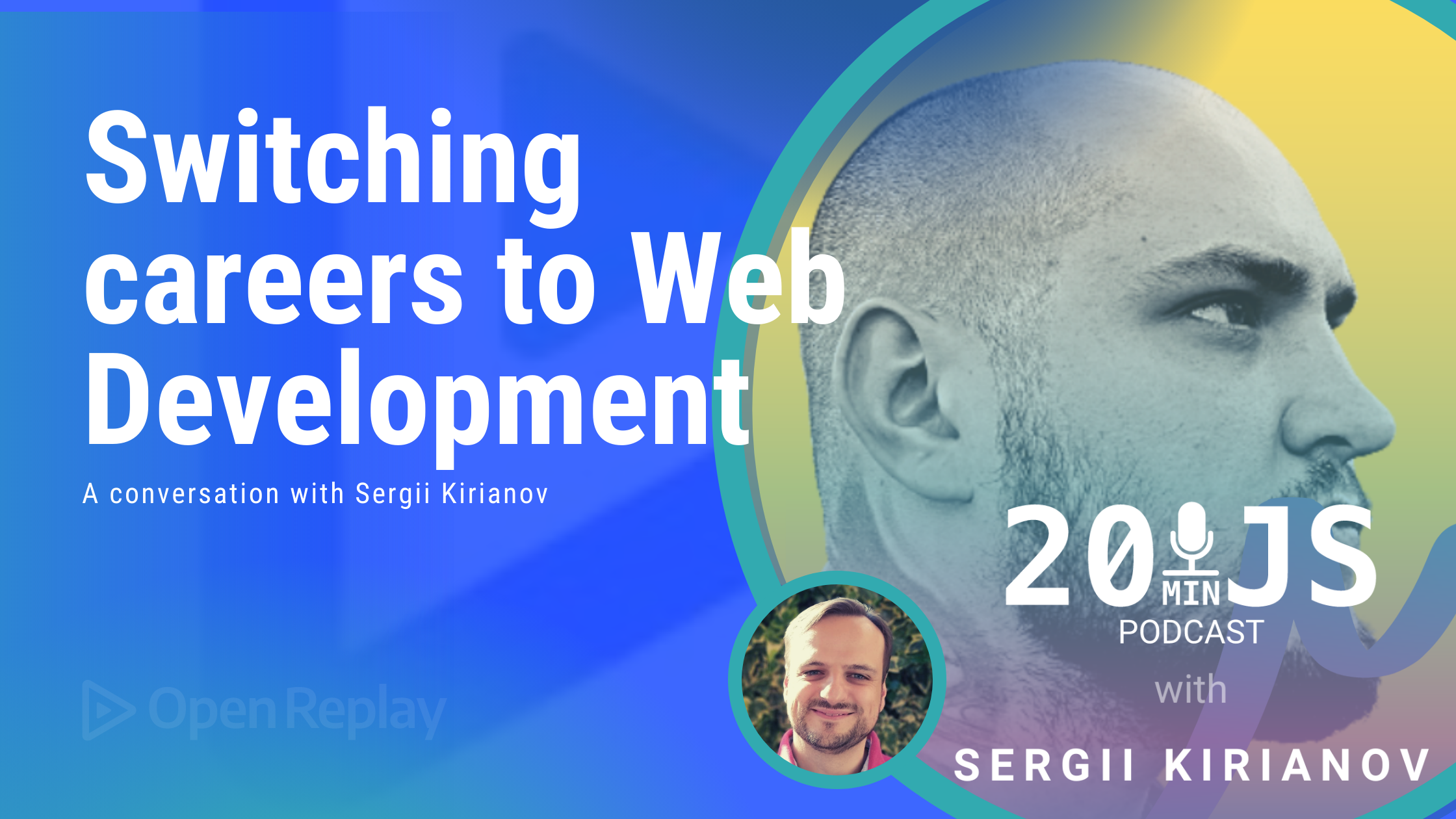 On episode 32 of the 20MinJS podcast, I got to interview Sergii Kirianov; a former sailor turned developer/YouTuber/self-proclaimed JavaScript Messiah, about his journey to becoming a Web Developer.

After all, Sergii isn’t the first person to want to switch careers into web development, but he has successfully done so in about two years..

If you want to listen to the full interview, you can do so here:

Otherwise, let’s take a look at the highlights of the episode!

It shouldn’t come as a surprise to anyone going through this process, but sadly, there is a lot of misinformation about the amount of time it takes to learn enough to get a job as a Web Developer.

Sergii spent one full year learning in his spare time before he could start thinking about applying to jobs, and once he started, it took him a couple of months to get his first one.

Now, that is not to say you can’t do it faster, but you’ll still have to put in the hours, and anyone else trying to sell you the idea that you’ll be able to get your first dev job in a matter of weeks, is probably trying to scam you.

In his own words, Segii even mentioned that while he could’ve gotten there faster, having a year’s worth of learning to put on his experienceless resume was better than stating you learned all that in “just 6 months”.

Highlight #2: Most roadmaps are wrong

When you’re switching careers you probably want to optimize the time you spend learning and honing your new skills, so roadmaps seem very appealing at this point. The idea of a pre-defined path you can follow to reach your end goal sounds perfect.

However, like with many other things online, most of the roadmaps presented by so-called “influencers” are not only wrong, but unrealistic. They claim you can follow just a few steps and get your first job, or even worst, they list all the right techs, but with very limited time windows for each one.

How are you supposed to learn React in 2 weeks if you just spent three days learning JavaScript for the first time?

That said, Sergii did mention a resource for roadmaps that he found to be very useful and reliable: roadmaps.sh

There you’ll find detailed roadmaps for many tech career paths, each showing you all the steps you need to take and listing valuable and free resources to start learning. 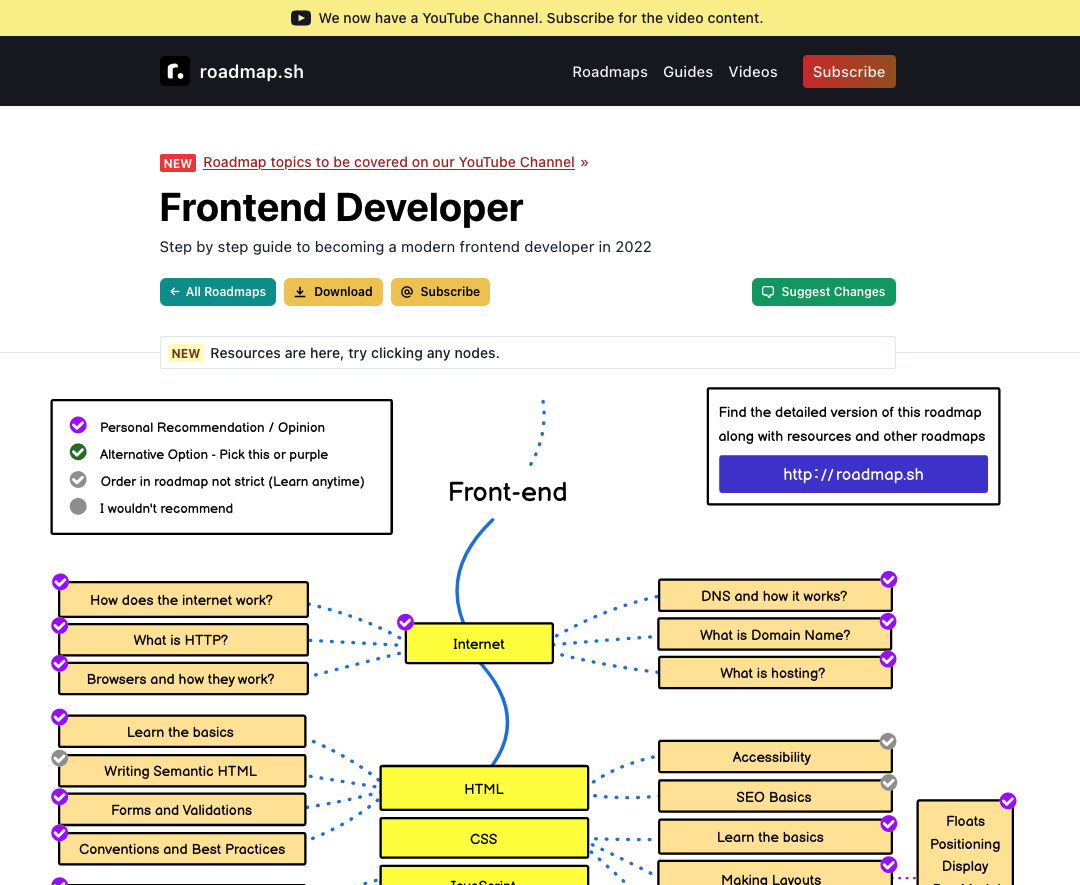 If you’re looking for a place to start, make sure to check it out!

Highlight #3: A proper resume is worth a thousand unfinished test projects in your portfolio

When trying to get their very first job, new developers have one major question: how to show themselves and their skills to potential employers.

There are many ways, an active Github account, having a nice portfolio site, and a complete and well-rounded LinkedIn profile. And of course, the good old fashion resume.

According to Sergii and his experience on his first job as a developer, his portfolio played no role in getting the job. In fact, while he presented the portfolio as part of the application, his resume was the only thing the recruiters looked at.

And that is true in many other companies, sometimes the person in charge of making the decision has no time to scan all your social media accounts and your websites properly, leaving your resume as the only document they will ever see. Using it, they will judge your ability to perform the role you’re applying for.

In other words, and to quote Sergii, you should treat your resume as an official document, make sure you’re adding all the required information so someone doing an initial screening will quickly pick up on your main skills and your formation (whatever that might be in your case).

Finally, a resource that Sergii recommends is this PDF from the University of Harvard, where they give you many tips to create your resume.

Another interesting point that we covered during the episode, was his experience with education. He himself learned and became a developer through some great free online resources, but he also admitted that he did it that way because he couldn’t stop working for a few years while going through formal education.

That can be typical for many career switchers who have responsibilities they just can’t ignore. In that case, Sergii recommends you going through the self-learning path, he also mentions some interesting good online resources, such as Harvard’s C50 classes  and the OpenSource University .

That said, if you do have the ability to stop everything and focus on your learning, he does recommend going through formal education, because, as he puts it, there is more to these environments than just the topic you’re learning about. You’ll network with others going through the same path as you, and you’ll make connections that might jumpstart your career. So don’t disregard formal education if you can spare the time for it. It might make a difference.

And those are the highlights from my conversation with Sergii, but don’t think that’s all we talked about, go check out the episode and listen to the JavaScript messiah himself tell his story.

Are you a career switcher as well? Leave a message below and share your experience!

Next.js vs NuxtJS: a comparison of two powerhouses

npm vs. yarn - Which is best for your project?