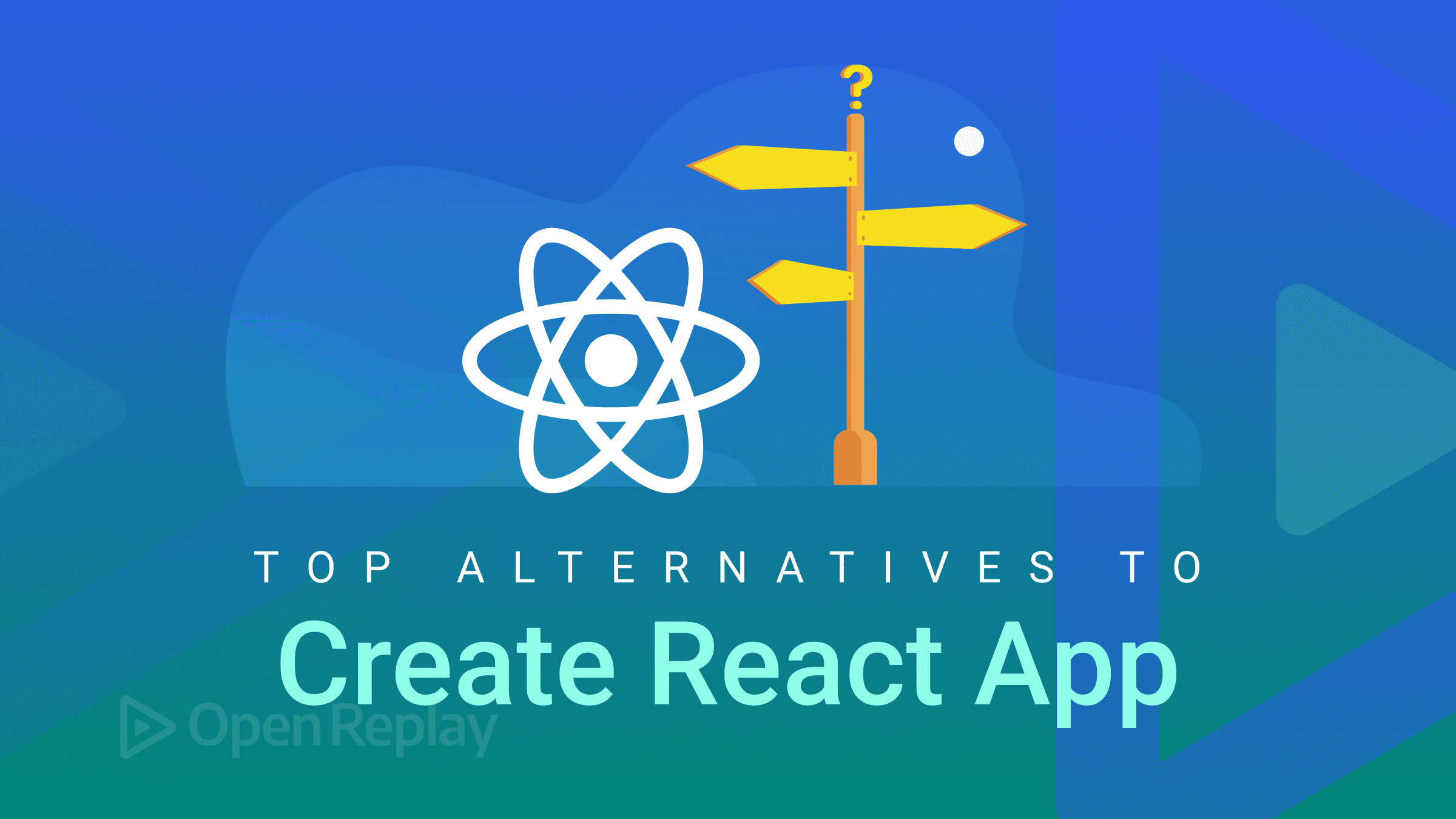 React is a JavaScript framework that makes creating graphical user interfaces easier. After being created at Facebook, it was made available to the general public in 2013. It is currently the driving force behind several well-known applications, like Instagram and Facebook, among countless others.

The React team’s official launch script, Create-React-App (CRA), is the best choice for launching your React applications. However, there are some difficulties that developers run into while starting their project with the CRA, and that’s what we’ll be looking at today.

The absence of Webpack configuration, lack of customized build configs, prohibition of multiple extensions, and many more, are complications developers face when building with the CRA script. And these complications have led to the findings of alternatives for Create React App.

In this article, we will look at alternative create-react-App boilerplates for React and explore their strengths and weaknesses.

Before we go into the Alternatives of Create React App, why don’t we look at how to create our boilerplate from scratch. With the help of a transpiler (Babel) and a bundler (Webpack), the major components of CRA, we’ll see how we can initialize our customized boilerplate.

Any project folder can be created; simply navigate to the folder, execute npm init in your current folder to generate a package.json file, and then save the project.

Your code and all of its dependencies are combined into one bundle file by Webpack.

We won’t utilize any webpack-related dependencies in production; they will all be development-related requirements. After the build is complete, webpack is no longer required. To launch the webpack command line interface, webpack-dev-server, run a local server, and generate an HTML template to serve our bundle; we require webpack-cli.

Babel transforms ECMAScript 2015+ code into a backward-compatible variant of JavaScript in both modern and vintage browsers.

We will create a file called .babelrc in our root directory and place the following code because we are working with babel-related dependencies.

The two runtime dependencies required are react and react-dom, which the command below will install within our project.

A few dependencies that will enable us to process CSS files will now be installed. Style-loader and CSS-loader must be installed. For Webpack to handle CSS and style files, this is required. These will also be development-related dependencies.

Make a ```public" subdirectory in the project's root directory. Make an index.html` file inside that, and place the code below.

Create a folder called src and place a file called App.js inside of it. To it, add the following code:

Under the src directory, create the index.js file. On this file, we will now configure React and ReactDOM. Put the next piece of code there.

The following code should be added to a file called webpack.config.js created at the project’s root. This file contains configurations for setting up the development server and combining the files into a single file.

We’ve set the mode to development. The -hot option lets Webpack load the app immediately after any changes are made inside the app, and the -open flag allows Webpack to open the tab in the browser when the start script is executed. To create a compiled bundle in the dist directory that can be served over the web, we just set the production mode for the build script.

Your React application should run on port 8080 when you run the start script. Kudos for creating a React application from scratch without using the create-react-app script. Although with one command we can archive this with the CRA script and its possible alternatives.

Vite is a new player in the frontend framework market tool. Vite is a universal solution that can bootstrap apps from many tech stacks, and it now supports Vue, React, and Preact templates.

To generate the boilerplate, we just need to run the command:

After providing your “Project name,” you’ll be prompted to select a framework as seen in the image below:

A React project is created in the directory when the React option is chosen. We must enter the directory and install the vite package as a dev dependency after the repository has been configured.

The dev script may then be executed as follows: 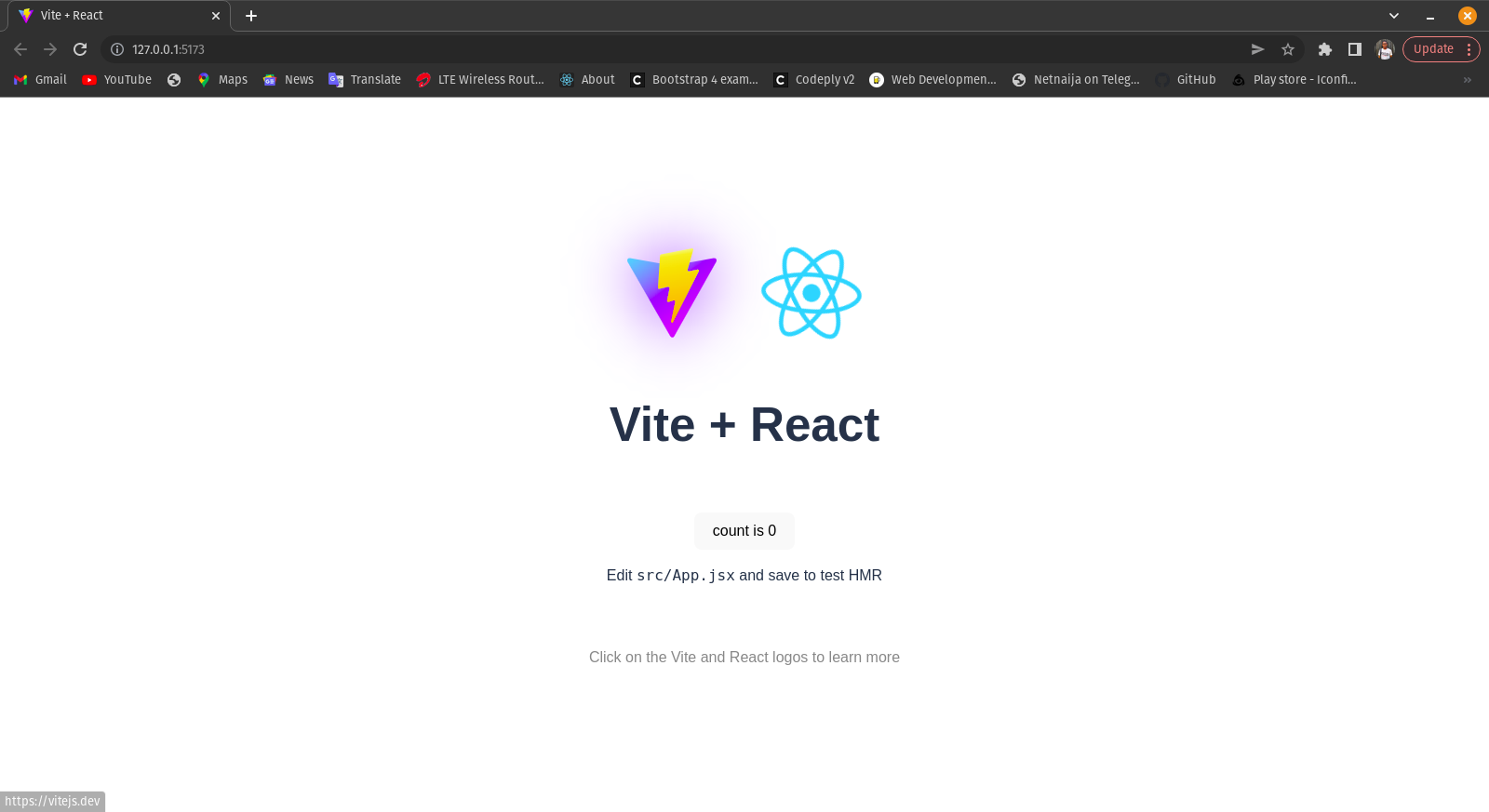 First of all, find a starter theme to use for your static site (although there’s a default starter, but for our site to look nice, we’d try out another starter theme), then you generate a site based on the theme by running the command below:

For this tutorial, we would use a wordpress-hompage stater theme.

To run our Gatsby site: 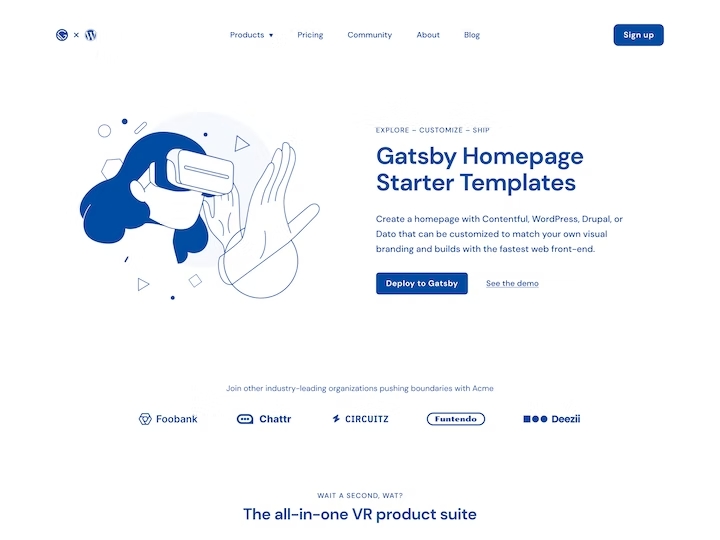 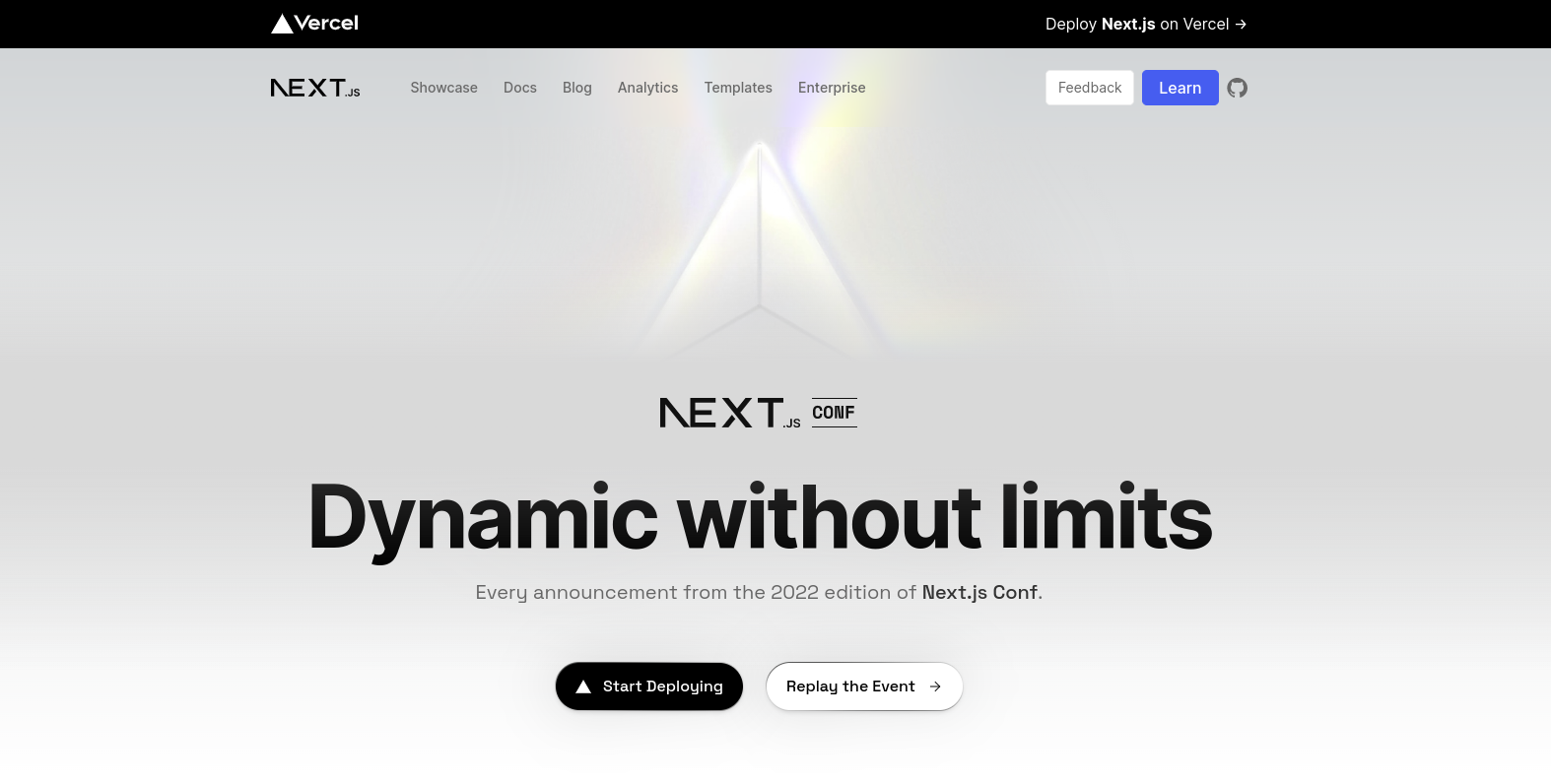 Create Next App is the best starting point If the requirement is a little more complex, such as server-side rendering or static site-building. A trustworthy technique to bootstrap a general SPA with client-side rendering is with Create Next App. It is a simple CLI utility for launching Next.js programs.

We only need to execute the following command to produce the boilerplate:

To start a dev server, we run the following: React-boilerplate is another tool that should be on the list for starting a React project. React-boilerplate portrays itself as the future of quick web apps on its home page and boasts that its software is accessible even when there is no network connection.

The setup script needs to be run when we enter the cloned repository:

Then comes the start script, which starts the development server:

This brings up the default homepage: 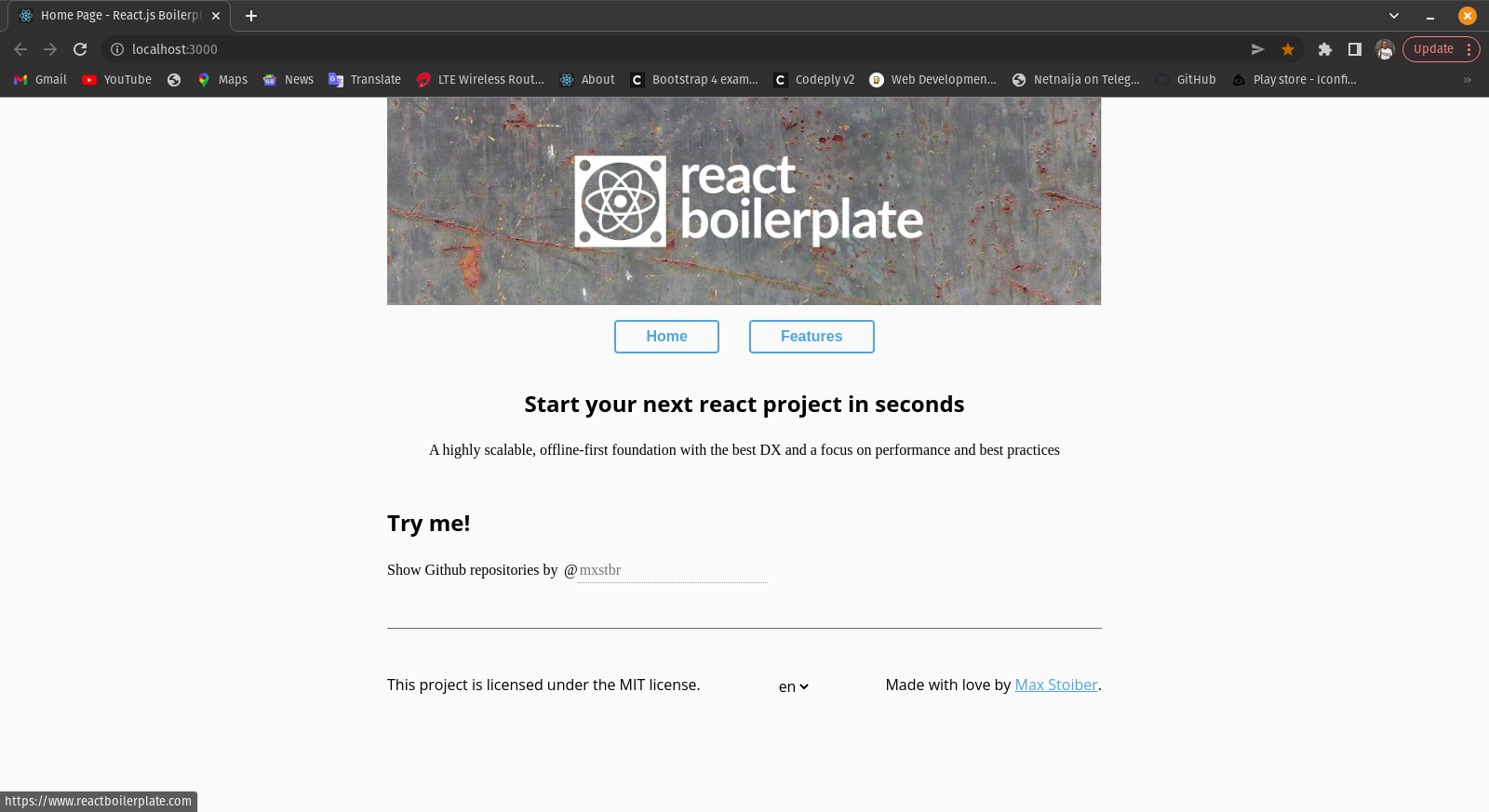 Let’s examine React Starter Kit, which describes itself as a boilerplate for isomorphic web projects. Before we conclude, it’s important to note that the website for React Starter Kit describes it as “extremely opinionated,” which suggests that it has already selected our tech stack for us, which consists of Node.js, Express, and GraphQL.

The most recent repository will be cloned to serve as the starting point for the boilerplate:

Install the dependencies by first moving into the newly created folder:

That gives us the simple boilerplate homepage we have here: We bring the finest React boilerplates list to a close. As we can see, everyone has a particular set of benefits and drawbacks. As a result, we will take a range of actions depending on the use case at hand, the developer, and the intended result. Thankfully, we have lots of choices.