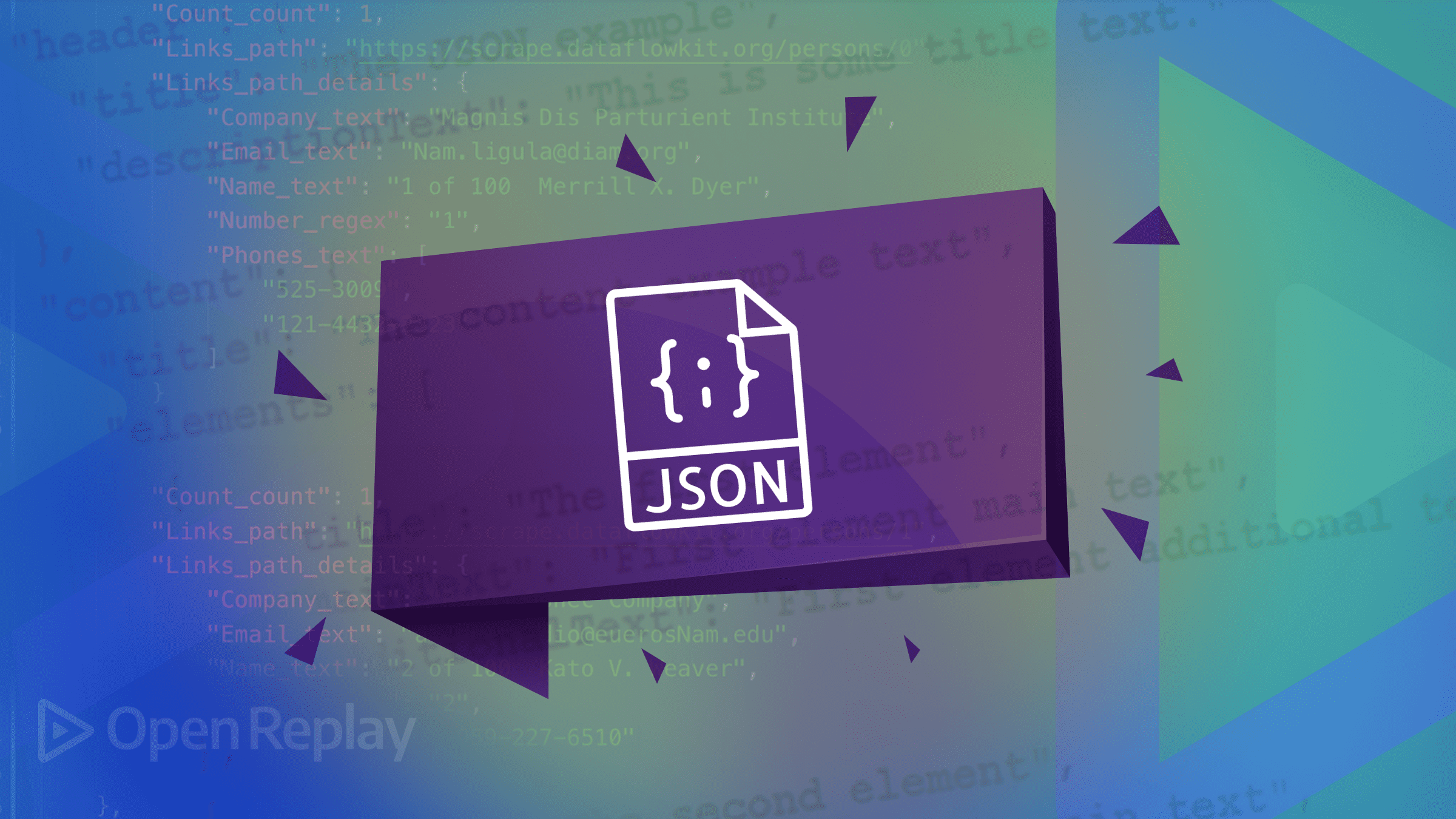 JSON (JavaScript Object Notation) is a text format representing data in key-value pairs. JSON is lightweight and widely used in the tech industry today for various purposes, one of which is presenting data in a human-readable format. Although it looks like an ordinary JavaScript object, it is very different. JSON files are saved using the extension .json.

JSON is a widely accepted format for many operations like configuring files and interchanging data (e.g., API data). It is fast, efficient, and simple to use as it consists of keys and values where the values can be accessed using their corresponding key.

By the end of this article, you will have learned what JSON is, its benefits, and how it compares to YAML and JavaScript objects. You will also learn some use cases of JSON and JSON methods such as JSON.parse() and JSON.stringify().

JSON is a text-based format for representing objects. This format basically consists of a key (in quotes) and then a value (which can also be a key to other values in cases where you have nested data. This is what a typical JSON format looks like:

In reality, unneeded spaces would be left out, and the format would be:

JSON data types are very similar to typical JavaScript object types, and they include the following:

Some of the advantages of using JSON are:

We may compare JSON to other objects and formats.

YAML (YAML Ain’t Markup Language) is also a text-based format used to represent data in a readable format. YAML also uses key-value pairs but in a different syntax from JSON. A YAML document usually begins with three dashes --- and ends with three dots ... just like you can find it written on the official YAML website.

YAML uses key-value pairs, which are separated by colons. It uses an indentation style similar to python to represent the data structure.

Some of the differences between JSON and YAML include the following:

Use Cases of JSON

JSON is popularly used across various fields in the tech industry today. Some of the use cases of JSON are:

API schemas are defined using JSON format. This schema is a way to describe the structure of the API to users who intend to work with it. Here’s what a typical API schema looks like:

JSON is also very much used in configuring files. Libraries and tools such as React, Vue, Vite, npm, etc., use JSON format for project configurations. Here’s a sample from cloud.google.com of what such configuration looks like:

JSON data can be serialized and stored on your computer using browsers’ localStorage and sessionStorage. This is super helpful when you must cache non-secret or insensitive data and store it in your users’ devices for future usage. A good use case of this is for saving insensitive user details for quick access instead of storing and retrieving them from the database.

JSON has two methods that come in handy when working with data: JSON.stringify() and JSON.parse(). User data is first serialized using the JSON.stringify() method and then may be stored in the localStorage or sessionStorage or used in another way. In case of retrieval, the data needs to be deserialized to a proper JavaScript object before it can be used, and that’s possible with the help of the JSON.parse() method.

Here are more scenarios where these methods are handy:

When building APIs, dates or timestamps are one of the most common properties in the API response. However, returning the actual date format in an API response can be problematic due to differences in time zones.

The solution is to serialize the date using JSON.stringify(new Date()) method, and then it is returned as a string like so:

Therefore, the same date is used regardless of where this API is consumed. You can use JSON.parse(timestamp) to get the actual date object.

If you’re unsure what deep copy means, please read this. Essentially, it is a type of copy where the original object and copied object points to different memory locations. Therefore, an update in one does not affect the other.

This can be achieved using the spread operator ..., but when it comes to nested objects, this approach fails as it only deep-copies top-level properties.

You’ve come to the end of this article. At this point, you learned about JSON format, what it is, why you should care, how it compares to typical JavaScript objects and YAML syntax. You’ve also learned about cases where JSON can be used, its advantages, and its data types.

JSON is super easy to learn and very much trendy in the tech industry today. Chances are you already use them, but if you haven’t, this is enough information to get you started.

A TIP FROM THE EDITOR: JSON is used in several articles; don’t miss Authentication With JWT For Your Website and Data Fetching Techniques with React, for example!

No Code vs. Low Code -- a Comparison

NoSQL vs. SQL -- A Comparison