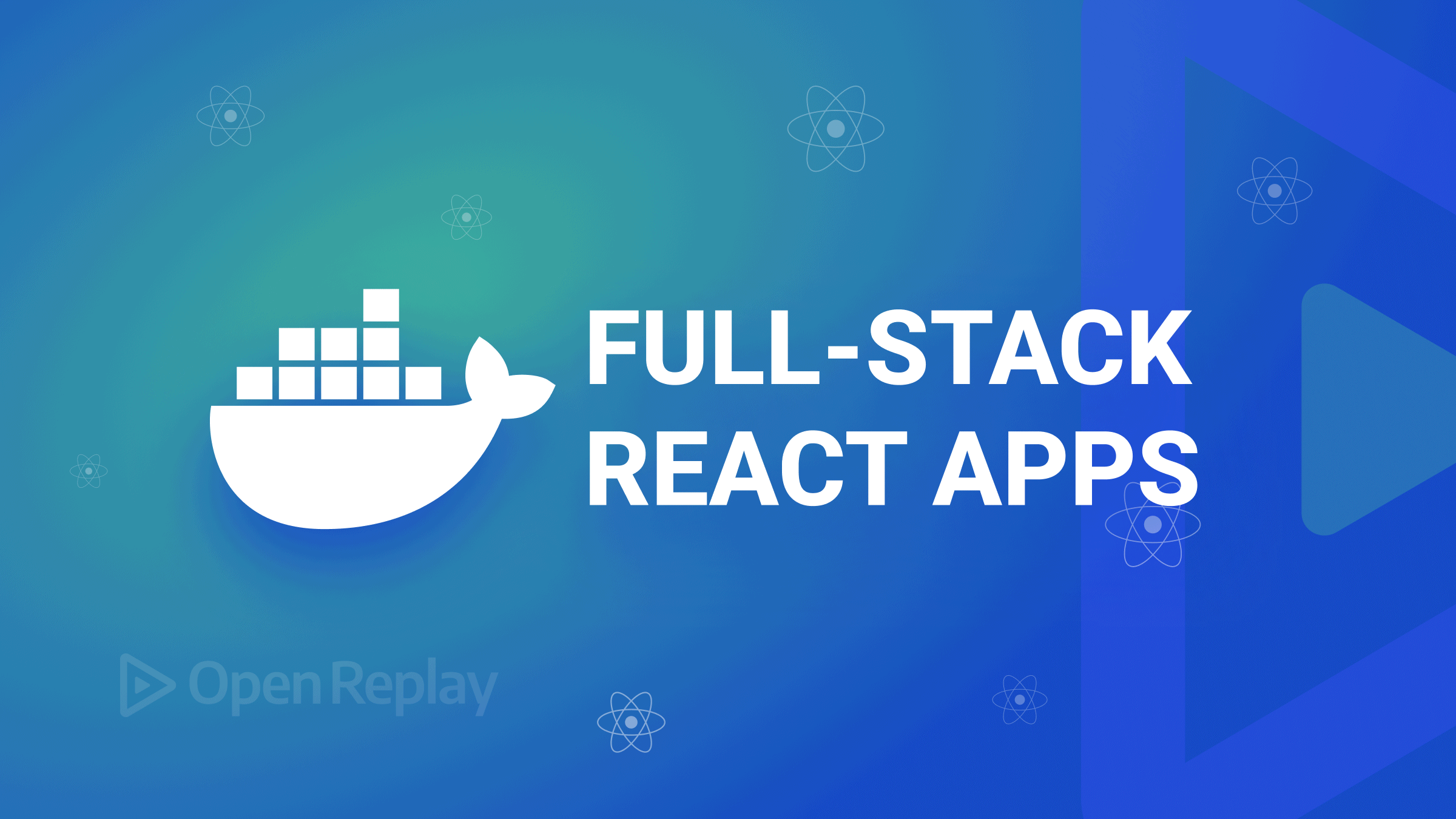 As a Developer, setting up local development environments can take time and effort. Take a React application as an example. Creating your application becomes even more complex when you need a backend and database to serve data to your application. Using infrastructures such as Docker and Containers gives a developer an upper hand to quickly set up and deploy applications.

One of the great tools to containerize your application is Docker. It allows developers to package and run applications along with their runtime dependencies in isolated environments that containers offer. With Docker, teams can develop, ship, and run applications separately from their infrastructure. The team can build the app as a collection of microservice, and you are allowing them to create independently deployable services to deliver software faster.

In this guide, we will run a full-stack React app in Docker. We will leverage Docker to run containers as a microservice. This way, we can serve a Node.js API, run MySQL as DBaaS, and consumer the data to a React backend within Docker. To follow along with this guide, it is essential to have the following:

To accomplish the goals of this guide, we need a running full-stack React, Node.js, and MySQL application. If you dint have one ready, you can go ahead and clone the following repository and have the code ready on your computer:

Once you have successfully cloned the above code template, let’s run it locally and ensure everything is working as expected before deploying the whole stack on Docker.

Setting up the Database

Within your cloned project, change the directory to the api folder:

This contains all code we need to run the backend. Go ahead and install the required dependencies:

This will expose the server on port 5000 and connect to the MySQL database.

Run an SQL query to set up the database table and its associated fields.

You can test the API endpoints using tools such as Postman to verify everything works perfectly.

Within your cloned project, change the directory to the web folder:

This contains all code we need to run the React front end. Go ahead and install the required dependencies:

You can start interacting with the application and perform the Node.js CRUD operations on a React front end.

You can confirm these changes on the MySQL database as well:

The whole application is working correctly on the local computer. Let’s now get everything running on Docker.

Dockerfile is a text file that contains instructions to build a Docker image. The images you create using a Dockerfile are then used to run a Docker container.

A Dockerfile contains commands such as:

We have two sets of applications here. Let’s now dive in and write Dockerfiles to build an image for each application.

Navigate to the api directory and create a dockerfile file. Proceed and create an image for the Node.js api using the following instructions:

Once you have the above instructions on your api/dockerfile, let’s run it on Docker. Within your api folder, run the following command:

In this case, node-api will be the name assigned to the image. Note that there is a . at the end of the command. This specifies the path location of the api/dockerfile.

This will build the application and create the images on Docker.

Let’s test if this image is working correctly. To do that, we will create a container to execute the above image using the following command:

This will expose the application on port 5000 externally. The node-api specify the image name the container will use. Open http://localhost:5000/ on the browser. This will execute a simple GET request that shows the application is ready and working within Docker.

Navigate to the web directory and create a dockerfile file. We will use this file to run a React app image. In this case, we have built React application that runs in development mode, increasing the bundle size and making the app run slower. When deploying this application, we need to build a production-ready application. The production build generates assets that are optimized, lightweight resource maps, and minified packages.

To create a production build, run the following command inside the web folder:

Create the Docker command to run the React production build inside the web/dockerfile as follows:

We will run the React application using Nginx, an open-source web server. Once you copy the React build, it will be accessible to Nginx, which can serve the app.

To run the React app image, run the following command within your web folder:

This will create a react-app image to execute the above application.

The image should be available in your Docker engine as well.

To test if the image is working, execute a container within Docker as follows:

Running the Fullstack on Docker-compose

Great! We have the application images working correctly on Docker. However, we can’t interact with them at the moment. These two are running as microservices on Docker. To run them as one application, we will create a Docker-compose file and create a Multi container to run them. In this file, we will also add the database that the server needs to persist the data. To view the saved data, we will create a phpMyAdmin container that provisions MYSQL UI on Docker.

Within your project directory, create a docker-compose.yml file and add the following services:

Setting up MySQL on Docker-compose

Inside the docker-compose.yml file, create a service to execute a MySQL container as follows:

Let’s quickly digest what is happening here. We have the following lines of code:

The above service will execute the following parameters:

That’s all we need to create and run MySQL as DBaaS with Docker. Once you understand the above instructions, diving into and implementing the following services is straightforward.

Create a service to create phpMyAdmin as follows:

Note that we are adding a depends_on: parameter. A phpmyadmin_srv will create a container to execute phpMyAdmin, which depends on MySQL. Therefore, we need to specify that here and refer to the MySQL service created within Docker to do that.

The database service is ready. Let’s now consume them using the Node.js server.

To create a Node.js service, we will first run a build that will execute the dockerfile that specifies how to create the Node.js app image inside the api directory. This app will depend on the MySQL database. Therefore, we need to add depends_on: - mysql_srv. This will tell Docker that Node.js need MySQL to run the backend_srv.

Docker will expose this app on two ports:

Note: This port must be identical to the port used to run the Node.js server. React will look to this port to access the server on localhost (within your machine).

Within the backend_srv, we add some environment variables to access the database. All these parameters are added inside the api/index.js as follows:

However, it’s good to note that the server is establishing a connection to MySQL on localhost. This won’t work with Docker, and the Node.js server is accessing MYSQL within Docker and not on your computer localhost. Therefore, we need to make some changes as follows (Ensure you save these changes):

We are adding mysql_srv as the host. This way, Node.js will be able to access MySQL within Docker.

For Node.js to access them as expected, we create these environment variables within the backend_srv service as follows:

Everything looks great. Let’s now wrap it with the React app as follows:

To create a React service, we will first run a build that will execute the dockerfile that specifies how to create the React app image inside the web folder. Port 5000 will expose React outside Docker within the local machine. This way, we can have access to the React host on Docker.

Finally, add a volume block to persist the application volumes within Docker.

At this point, your configuration file should look as follows:

Running the Infrastructure on Docker

We have everything we need to get the on ready on Docker. To do this, run the following command ensuring the command line paint to the location of your docker-compose.yml file:

The flag --build will allow Docker to print the logs on your container. This way, you can keep track of the running services and know when something goes wrong.

This command will build the required images and container services. As an example, you can see the server is correctly set up, as shown by the following docker logs: 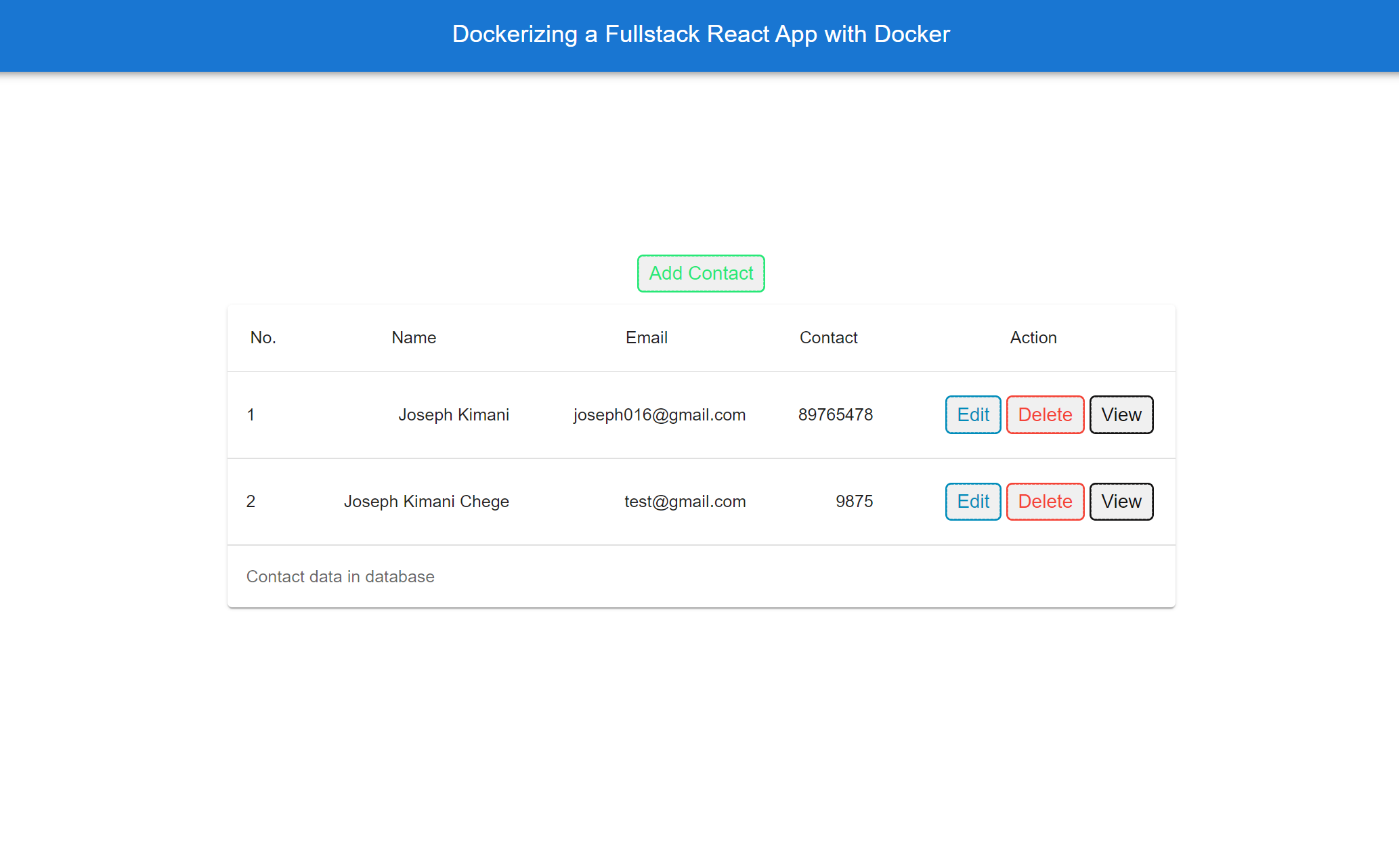 Likewise, these changes should reflect to the MySQL database as such. Let’s test that out using phpMyAdmin. Open http://localhost:8080/. Provide the login details. These details should be the variables you use to run your MySQL database. In this case:

Once you log in successfully, you should have your database, table, and data as such:

Congratulations! You now have a Fullstack React application served by Node.js and MySQL backend running a containerized Docker infrastructure. For any Docker code reference, check out this GitHub repository.

I hope you found this guide helpful. Happy coding!

A TIP FROM THE EDITOR: For a way to develop without needing actual servers, consider the ideas in the Mocking APIs With Mirage article.

Building a blog with React and RestDB