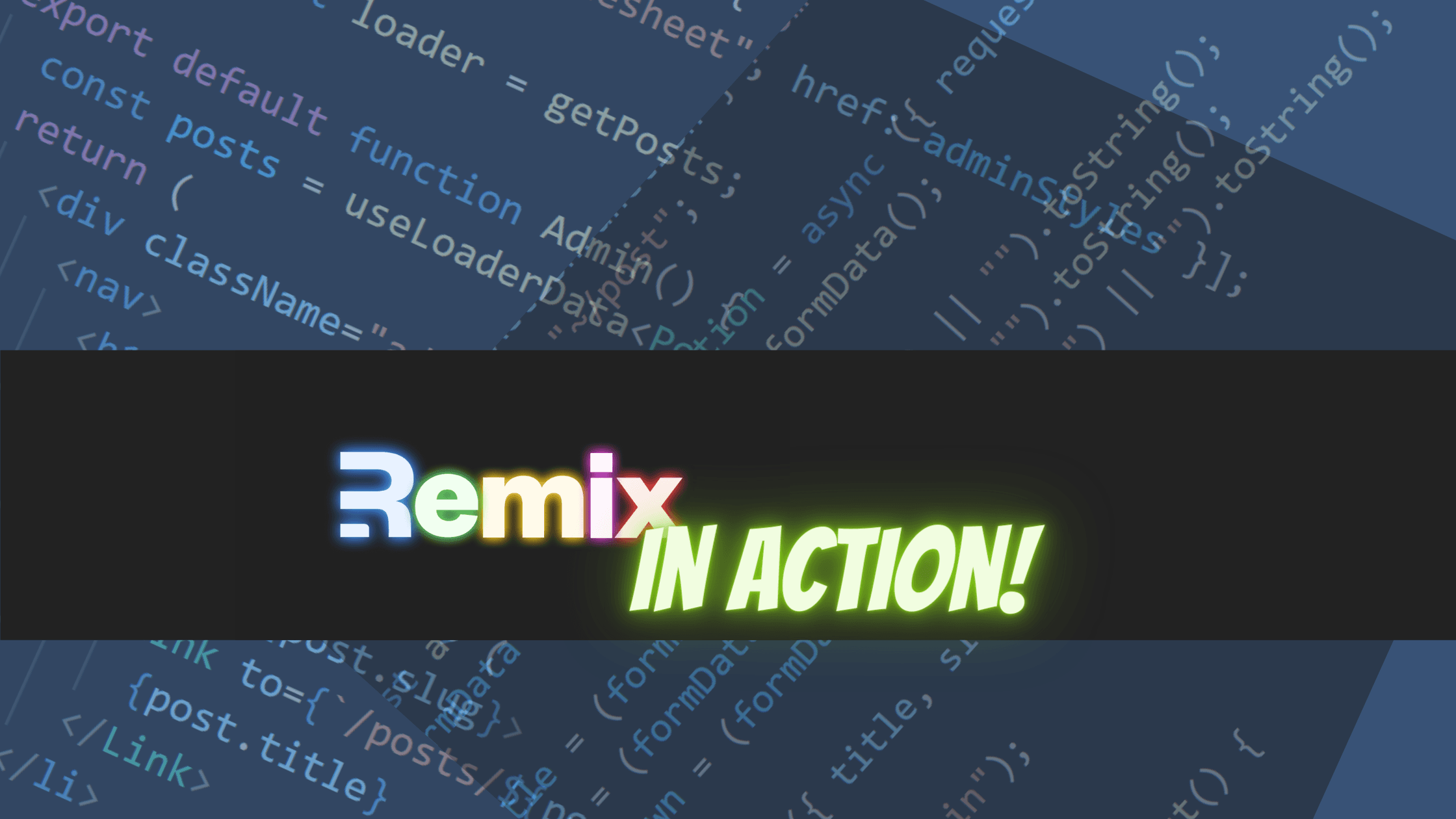 RemixJS is in every React developer’s mouth right now, as they seem to be the new kid in the block. But how good are they? Instead of reviewing other people’s experiences, I went ahead and followed their quick start guide to build my own mini static blog and then added some dynamic behavior. Was it good? Does it live up to the hype?

The getting started step

Getting started with Remix is relatively easy, although their one-liner didn’t exactly work as planned. I guess that’s because I’m on a Windows box and NPM had some trouble installing some dependencies. I’m assuming this is something they’ll work on in the future.

So according to them, all you have to do to create and then start your project is:

And then answer the questions. My problems:

Mind you, this is not a big deal, but just so you know, if this happens, the best alternative for you is to then execute:

That will boot up the dev server and it’ll watch on any changes you perform to the files while working on your code.

Everything else, to be honest. Once I managed to get the dev server up and running (meaning, once I understood the script I had to run), it just worked. The generator worked properly and created every file it needed and even though I had a bunch of errors during the dependency installation step, the needed ones were there, so it all worked.

The watch feature also was great because both the server and the UI were updated before I could finish ALT+TABing into the browser.

The coding your routes part

Any basic blog will have 2 types of routes:

Additionally, as part of the tutorial, you’ll also create an “Admin” section, which will allow you to create articles directly from the UI. This is interesting because it covers an aspect that the first 2 don’t: client-server communication.

Routes are the bread and butter of everything you’ll do with Remix. Not because this is a framework for designing APIs, but rather because there is no distinction between back-end and front-end code while you’re writing it. The communication between both parts is done by the framework as long as you follow some standards:

For example, if you want to create a page that will list all your blog posts, you’d write somethign liek this:

There are several things to note here:

This makes it possible for you to provide the required data on the server-side the first time this page is rendered, and then to provide the dynamic content, requested directly by the UI using the fetch API. That’s right, the framework is doing all the internal wiring for you. This is very powerful.

As already mentioned, actions are functions that you defined (and export) when you have to do some data transformation. Routes that respond to POST, PUT, PATCH or DELETE will have their action function called before the loader and whatever the first one returns, that’ll be the result of the request.

Let’s see what an action function looks like following the blog example. In this case, this action takes care of receiving the “crate new blog post” request and saving the data to disk:

Now, there is one interesting bit I didn’t mention so far: this action is part of the /posts/new route. And the default function on the route is the following:

What I’m trying to show you here is that both, the above function and the action are part of the same file. Now, notice how the form element doesn’t have an action attribute. That means that when you hit the “Create Post” button, it’ll post its content onto itself. Thanks to the fact that you defined the action, our function will be called once the method goes from GET to POST (because of the form) and the redirect will prevent it from displaying the same form again.

This part worked great, and I while my old web dev brain had some trouble at first, it wasn’t the framework’s fault. So I would rate this part with a 10 out of 10.

Now, this is where things started to get interesting. Once I had the basic routes working and some static content generation ready, the tutorial took me out for a spin with the “Admin” section, because it very quickly created a dynamic interface that would partially update depending on what I was doing.

Here is a quick example of what I mean:

The left-hand side always stays the same, just listing the blog posts on the system (the ones returned by the first loader I showed you before). And the right-hand side goes from showing a link, to the form from before and then back to the link.

Now, this is not something unseen, however, the fact that it was so easy to implement is that mind-boggling part of this whole thing. Let’s take a look.

The key to the above behavior are “nested routes”, which essentially allow you to define sub-routes. Something like /posts and /posts/new or /posts/edit/1234. The last 2 are nested within the first one.

The interesting aspect from Remix though, is that nested routes map directly to nested UI components.

So if you want to achieve this partial update on your UI, you’ll define a “wrapper” route inside your “routes” folder, like this:

There are 2 main points to notice here:

From now on, you can define a set of routes within the routes/admin folder (notice how the name of the folder and the above file match). And all those routes will be rendered within the Outlet component. I’ve already shown you the /routes/admin/new.tsx file, it was the one with the form.

The cool thing to notice here, is that the form is only saving a file to disk. That’s it, the left-hand section of our page, which is controlled by the above code is automatically pulling the updated data without us having to worry about any of it. Did you catch that? Go back to the GIF and notice how the left-hand side is updated after I save my new article.

If we’re talking about ratings, I would rate this feature with an 11 out of 10.

The part about styling your UI

I’m not big on CSS, however, the way Remix handles the styling of components is quite simple. If you see the above code snippet, you’ll notice the links function being exported. Every route can export its own links and these functions will return an array of stylesheets for the framework to merge and render. And you can just import the CSS file into a variable and then use that as part of the return of the links function:

This is all you need to worry about, the nested routes will share the routes from their parents as well as their own. It’s a simple, yet powerful solution to understanding how to load what on each section and prevents you from having to worry about modifying the actual root template depending on each section.

I personally found this quite easy and simple, so it’s a 9 out of then, considering the class attributes on the HTML code doesn’t work (you need to use className instead).

Remix is a very easy-to-use framework as long as you’re the type of developer that is OK with the Convention over Configuration principle. This means that as long as you abide by their rules, a lot of things happen automatically and simplify your life (like nested routes and dynamically updated sections of the UI, or the UI-Backend connection happening without you writing a single line of code). And on top of that, the documentation, while not yet finished, is great and filled with useful examples.

Finally, in case you’re wondering about the rest of the code, you can get the full source for my example here. Just clone it, and run npm install && npm run dev, it should work.

An Alternative to Next.JS? - Everything You Need to Know About RemixJS