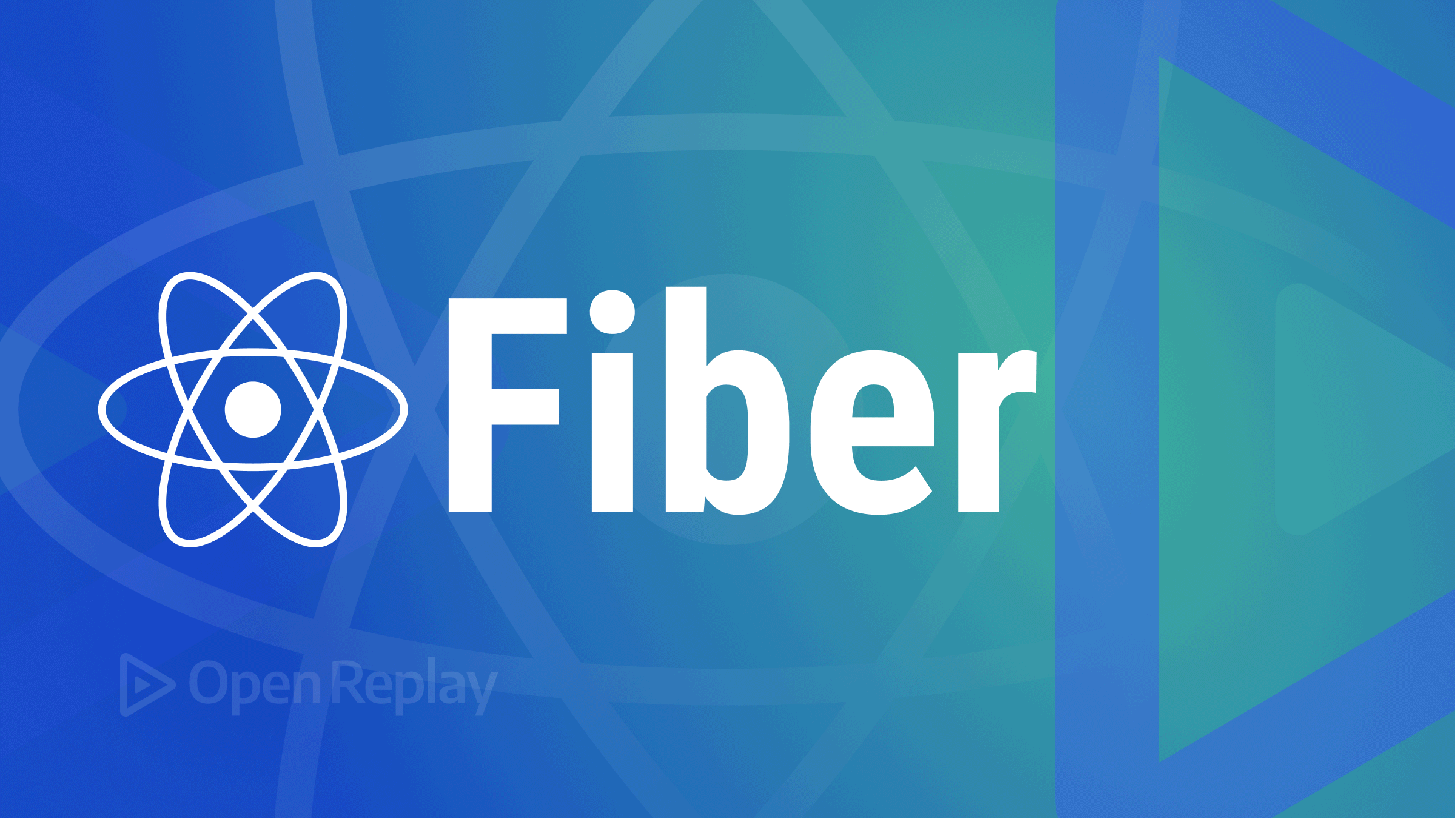 Facebook began the creation of React Fiber in 2015(It is currently the default reconciler). The main task was to invent an algorithm that would reduce the consumption of system resources to accelerate the application performance and increase the responsiveness of the UI(user interface) with decreased user device loads. Let’s understand how React Fiber makes this possible.

You will learn the following in this article:

To understand React Fiber, we need to know what the reconciler and renderer are. These are the two core components used by React to render our applications.

As per React Design Principles document:

Even when your components are described as functions when you use React you don’t call them directly. Every component returns a description of what needs to be rendered, and that description may include both user-written components like <LikeButton> and platform-specific components like <div>. It is up to React to “unroll” <LikeButton> at some point in the future and actually apply changes to the UI tree according to the render results of the components recursively.

This is a subtle distinction but a powerful one. Since you don’t call that component function but let React call it, it means React has the power to delay calling it if necessary. In its current implementation React walks the tree recursively and calls render functions of the whole updated tree during a single tick. However in the future it might start delaying some updates to avoid dropping frames.

The main points are:

In a nutshell, React Fiber is simply a reimplementation of React’s core reconciliation algorithm. It can be said to be the reimplementation of the stack but specialized for react components(where the stack can be interrupted at will and stack frames manipulated manually). It has been the default reconciler since React 16.

The primary goal of the React Fiber reconciliation algorithm is to enable React to take advantage of scheduling(which was not possible with the previous stack reconciler). React is now able to:

As a result, there is an overall improvement in the responsiveness of the UI and overall performance of React applications, especially apps with animations.

For React Fiber to do any of the things listed in the preceding section, it first needs a way to break work down into units. In a sense, that’s what a fiber (not Fiber with capital ‘F’) is. A fiber represents a unit of work.

Since React Fiber is the reimplementation of the stack (a more customizable stack), we can think of a single fiber as a virtual stack frame. It corresponds to a stack frame but maintains a one-to-one relationship with the instances of react components. 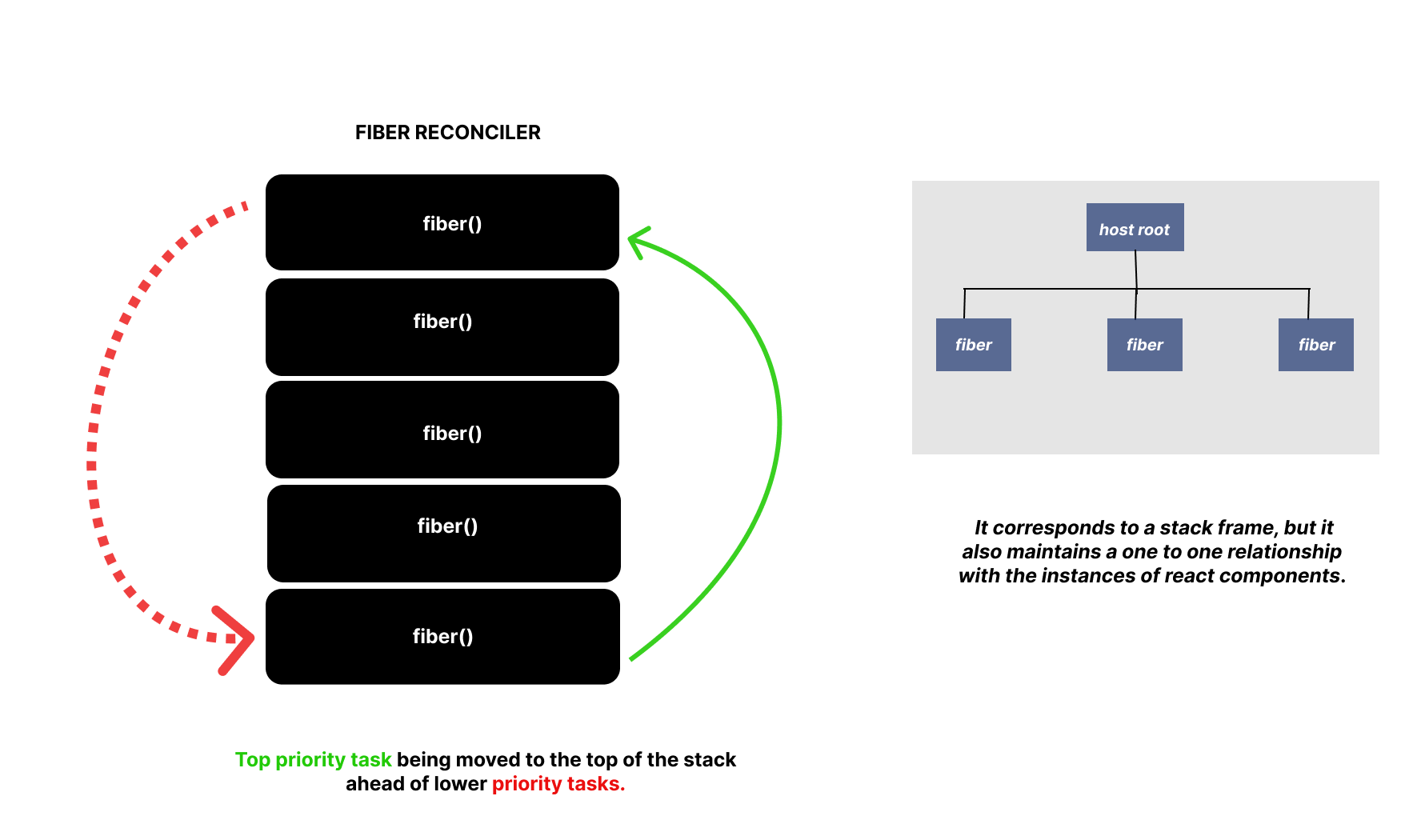 The literal implementation of a fiber is an object. It is simply a Javascript object that contains information about a react component.

The first fiber node created by React is the host root, which represents the container DOM node ( the DOM element which you pass to ReactDOM.render() but as of React 18 root.render())

A fiber object has specific properties that allow it to track information and the relationship between fiber nodes.

The child fiber corresponds to the value returned by a component’s render method. So in the following example,

The sibling field accounts for the case where render returns multiple children.

flush To flush a fiber is to render its output onto the screen.

N/B: It is important to note that React fibers are not similar to react elements. Though they are often created from react elements and even share some properties(type and key), the key difference between both is: while React elements are recreated every time, fibers are being reused as often as possible (though they have to be created at the initial render).

Since a fiber presents a unit of work, before React renders anything to the DOM, it processes each fiber(unit of work) until we end up with something called ‘finished work’. React then commits this ‘finished work’ which results in visible changes in the DOM. This all happens in two phases.

Rendering a tree of fibers 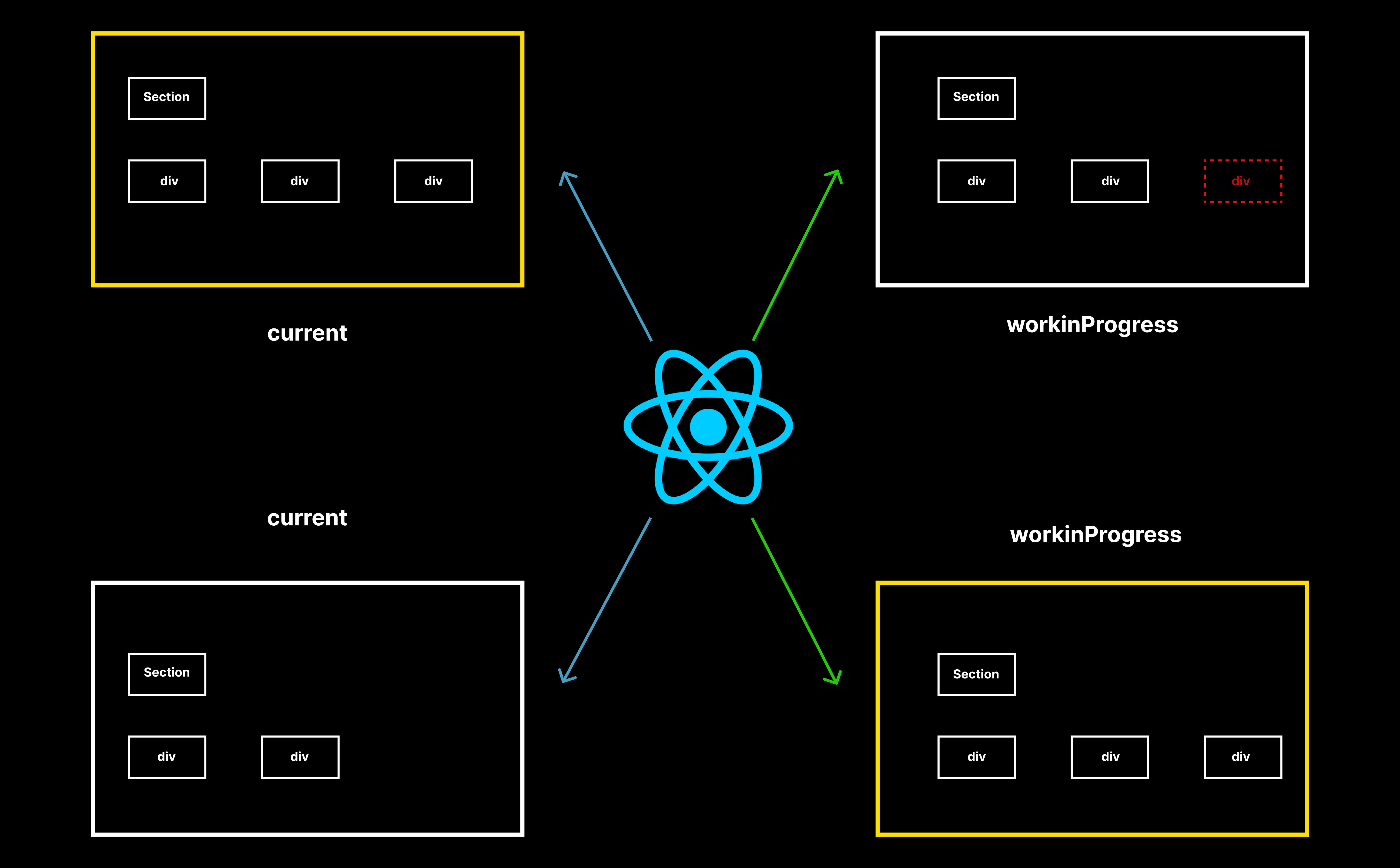 How does Fiber avoid UI inconsistency? By simply splitting work into two phases:

In this phase, React starts building the workinProgress tree, which follows a process like this:

In this phase, all the updates for the nodes in the effect list are performed and reflected on the DOM. The main thread applies all these changes in a single go. This phase is synchronous, unlike the render phase, which can be paused and resumed.

Some features that you can currently use in React because of Fiber are:

This article is a simple introduction to the React Fiber algorithm and a high-level view of how it works. There is a deeper level of abstraction to the algorithm, but you now know the fundamental concepts behind the Fiber Reconciler and how it works.

A TIP FROM THE EDITOR: For more on Fiber-related topics, do not miss our React 18 - What’s New and How it Will Benefit Developers and Catching Errors In React With Error Boundaries articles.