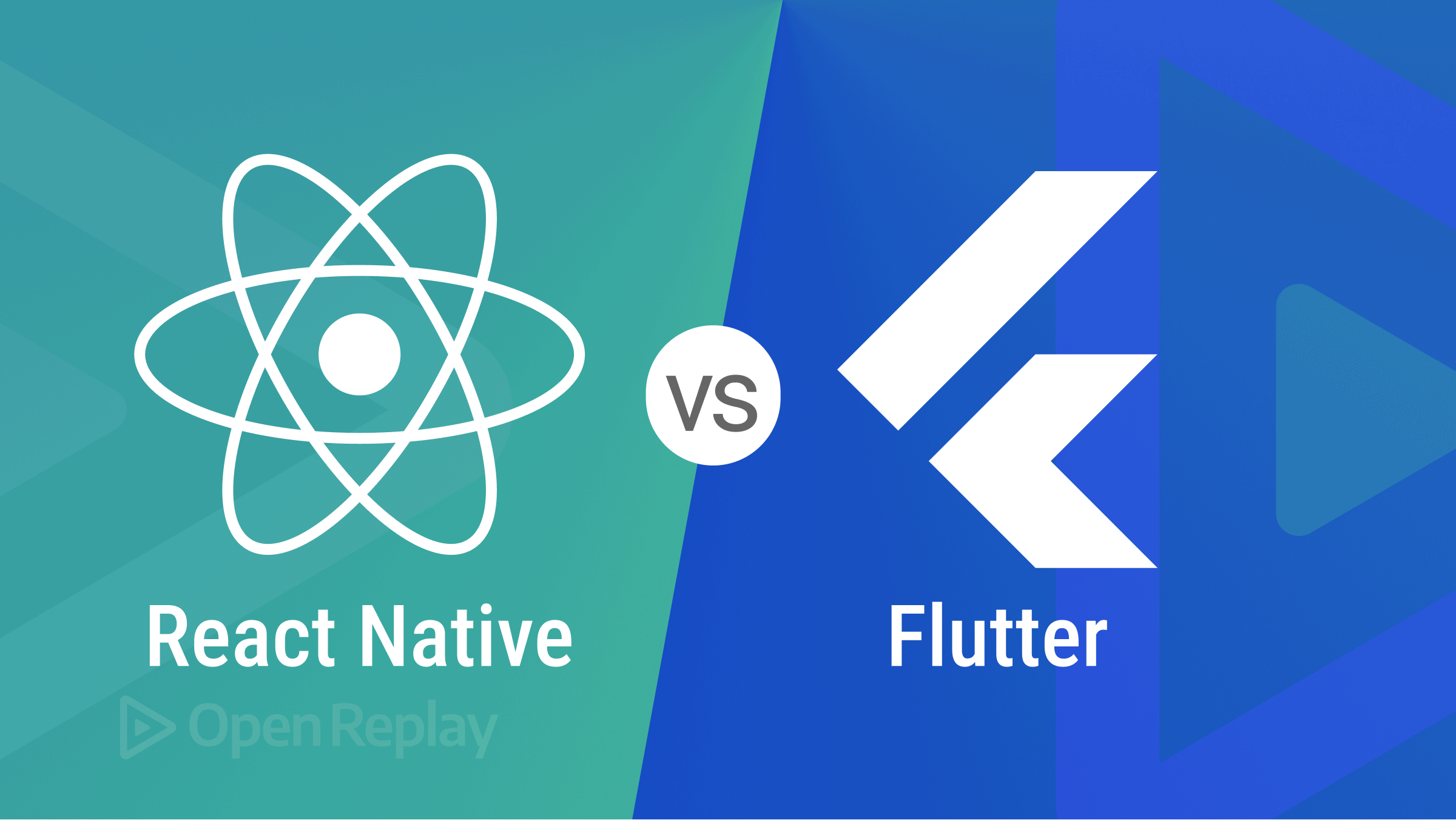 The two most popular frameworks for building cross-platform mobile apps are React Native and Flutter. These titans are supported by Facebook and Google, two of the largest tech businesses in the world. According to Statista, there are more than 6.0 billion mobile users worldwide, and 42% of developers will pick Flutter vs. 38% who will choose React for creating apps. Cordova, the third most popular framework, is only selected by 16% of users. More than 2 million developers have used Flutter, and 500,000 do so monthly. Although the numbers are awe-inspiring, many depend on how popular mobile apps are with users.

What is React Native?

Google developed the Flutter cross-platform user interface framework. Since its original release in May 2017, Flutter’s popularity has continuously increased. With it, businesses must maintain one codebase when developing apps for many platforms. The time and resources involved in developing and maintaining such software significantly decrease.

The Differences Between React Native And Flutter

React Native and Flutter share many similarities, but they are also quite different in a handful of key ways. 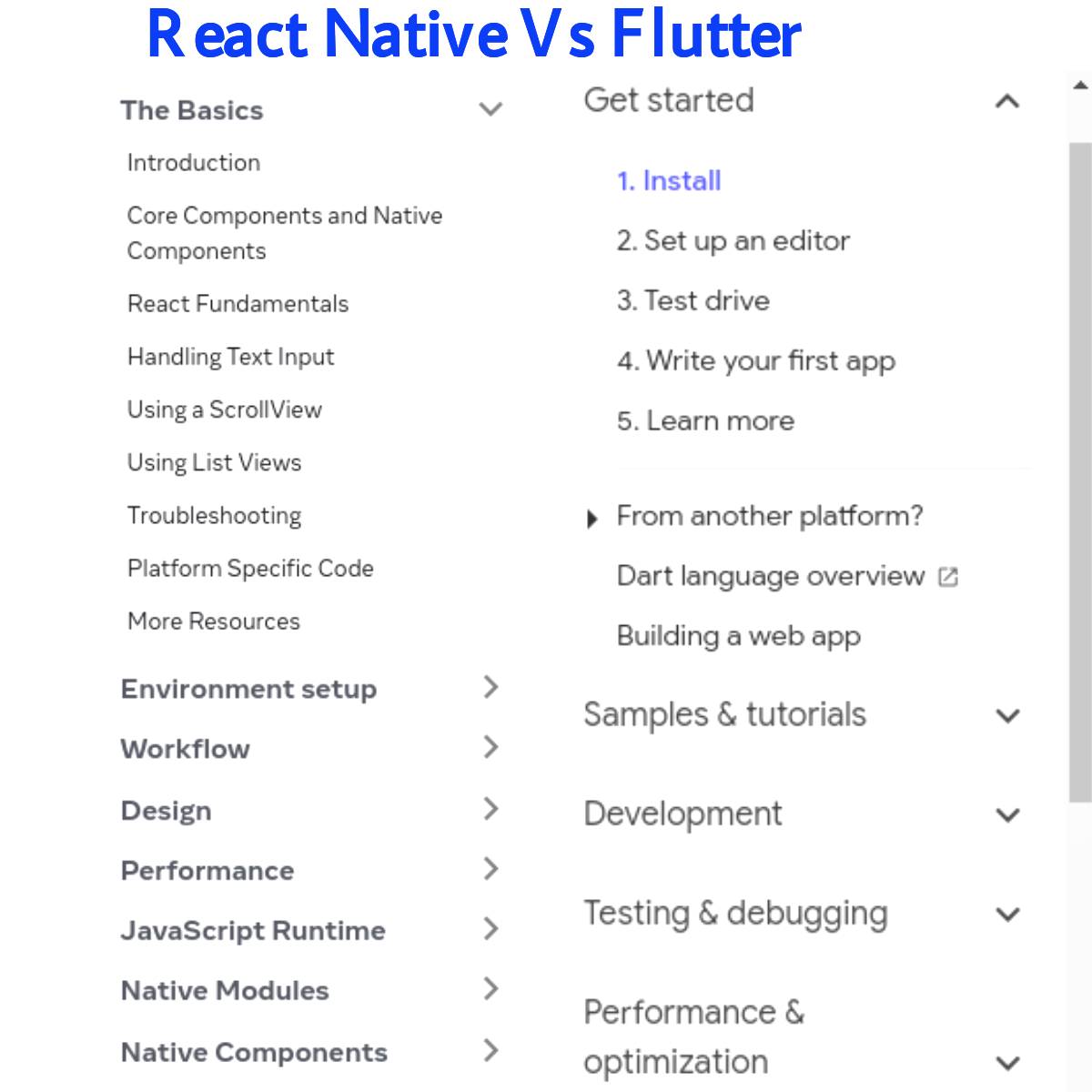 We’ll compare React Native Vs. Flutter, explore what makes each framework so special, and discover why they’re highly sought-after. The comparison will be based on the Performance, Libraries and Packages, Community, and File Structure.

It’s difficult to say whether a Flutter or React Native app performs better. There are numerous aspects to consider, like the type of app, codebase, animations, transitions, app size, layout, data passing, the end user’s phone, and more, so it will be different for every app. Both frameworks use hot reloading, which speeds up development by allowing you to see changes as soon as they are made.

Contrarily, the Dart code used by Flutter is directly translated into C, which is as near to native as you can go. No bridges are necessary for Flutter code to communicate with native code. It is safe to believe it would improve performance, giving it an edge over React Native, but recently JavaScript bridges (which communicate with the native code and bridges them as a result constitute slow app performance) were replaced with JavaScript Interface in React Native’s new architecture to address the performance issue (JSI). Without utilizing bridges, JSI enables developers to call the native module directly.

With the help of their developer and user communities, Flutter and React Native can keep enhancing their performance. On performance, Flutter narrowly prevails right now.

The Flutter and React Native communities are thriving, with numerous conferences, hackathons, and events occurring every year.

It is impossible to overstate the breadth of the community and communication avenues where you may interact with professionals and obtain assistance with your development-related question.

Here is a comparison of each tool’s most popular communication routes in more detail:

As you can see, the Flutter community has expanded more than the React Native community, which is significant since it indicates that Flutter developers are actively fixing more problems. You may get a sense of the speed and assiduity with which unresolved issues reported by developers are being handled by just looking at closed GitHub issues.

N/B: Every Data/Information are gained from Statista, Stack Overflow Survey, and Google Trend.

Statista’s most recent study states that Flutter will be the top cross-platform mobile development framework in 2021. React Native falls short of Flutter by 4% (42% versus 38% for Flutter). However, it’s accurate to claim that both technologies are used almost equally. Hopefully, statistics for 2022 will be out soon. 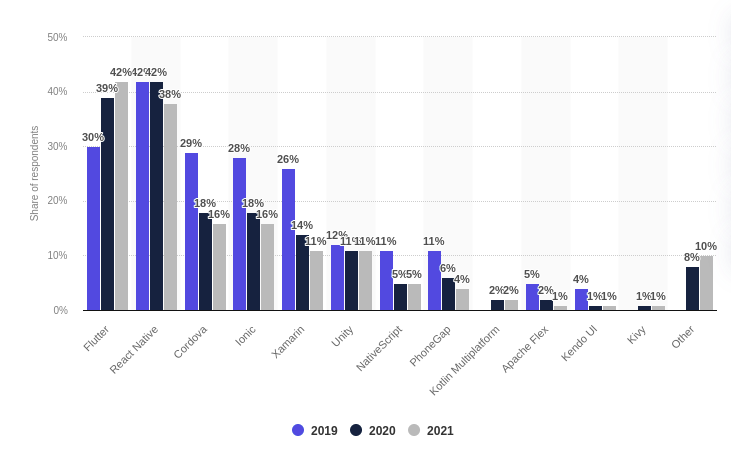 As of 2021, Flutter was leading the race for “Cross-platform mobile framework used by developers” on Statista. But there is a current survey made for both frameworks on the recently conducted Stack Overflow Survey, and it includes 2022 statistics as well.

According to the statistics obtained from Stack Overflow Survey, in terms of usage and popularity, Flutter was on the verge of surpassing React Native in 2021. With 0.96%, React Native took precedence over Flutter in 2021. 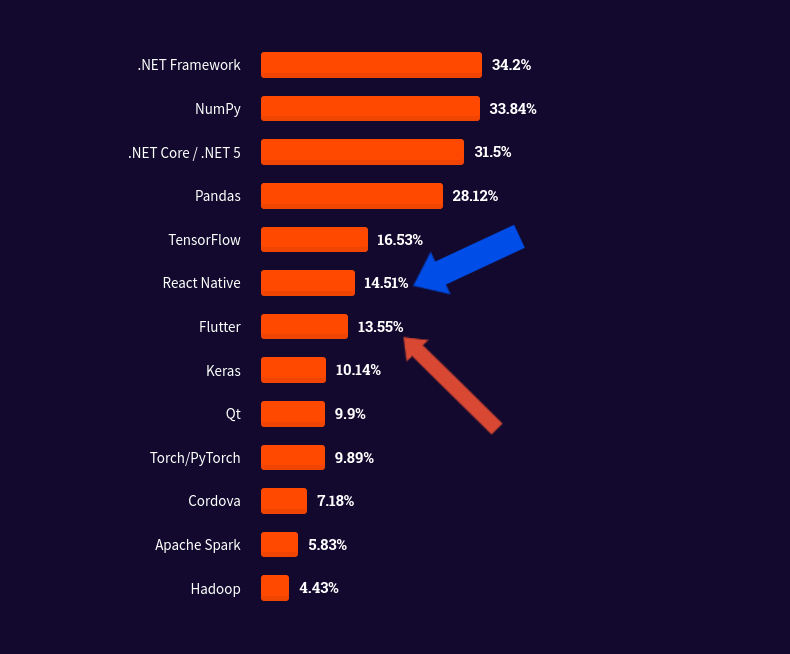 In 2022, Flutter has overthrown React Native in the popularity contest. So that technology has taken the lead. 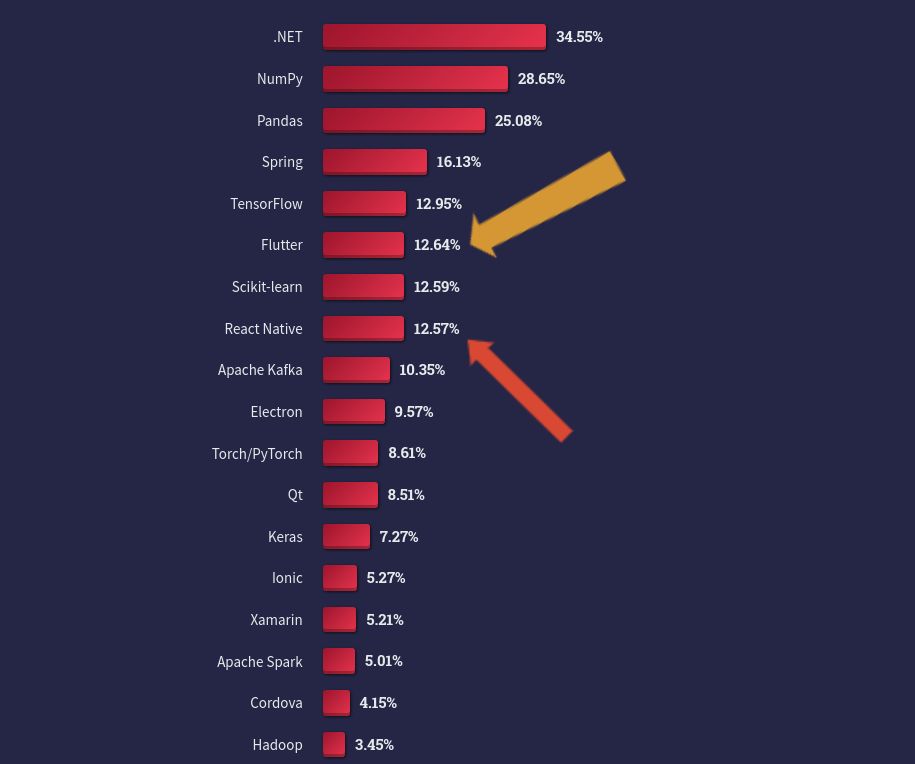 In the Stack Overflow Survey 2022, Flutter beats React Native in the category “Most Popular Technology - Other Frameworks.”

A close struggle between the two is evident from results from Google Trends. Flutter overtook React Native for the first time in over two years in April 2020 and has maintained that position through 2022.

The code structure in this part should look extremely familiar if you are already familiar with React for the web. Similar to how React projects are set up, React Native projects follow the same architecture:

The widget-based architecture of Flutter is highly distinctive when compared to conventional programming paradigms. Once you comprehend how it operates, it becomes automatic. 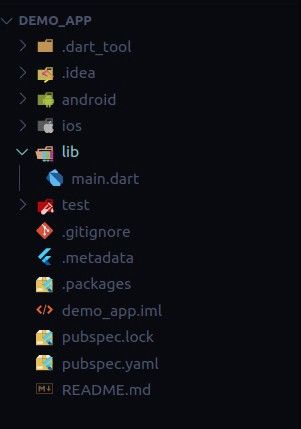 When To Apply Either Framework

React Native and Flutter are substantial for fast styling and easy mobile app development. However, it is best to know when to use the different frameworks in developing one’s project.

When to use React Native

When To Use Flutter

Flutter will function properly if:

There is no clear winner in this contest; each of Flutter and React Native has advantages and disadvantages, and the best option relies on your development background as well as the objectives and specifications of your project. Writing mobile apps in React Native makes sense if you are already familiar with JavaScript. However, you might think about giving Flutter a shot if you’re hoping for improved performance, stability, and a more harmonious environment amongst ecosystems.

Building an eCommerce Mobile App with React Native and WooCommerce

Building an Encyclopedia with React and Wikipedia Search API