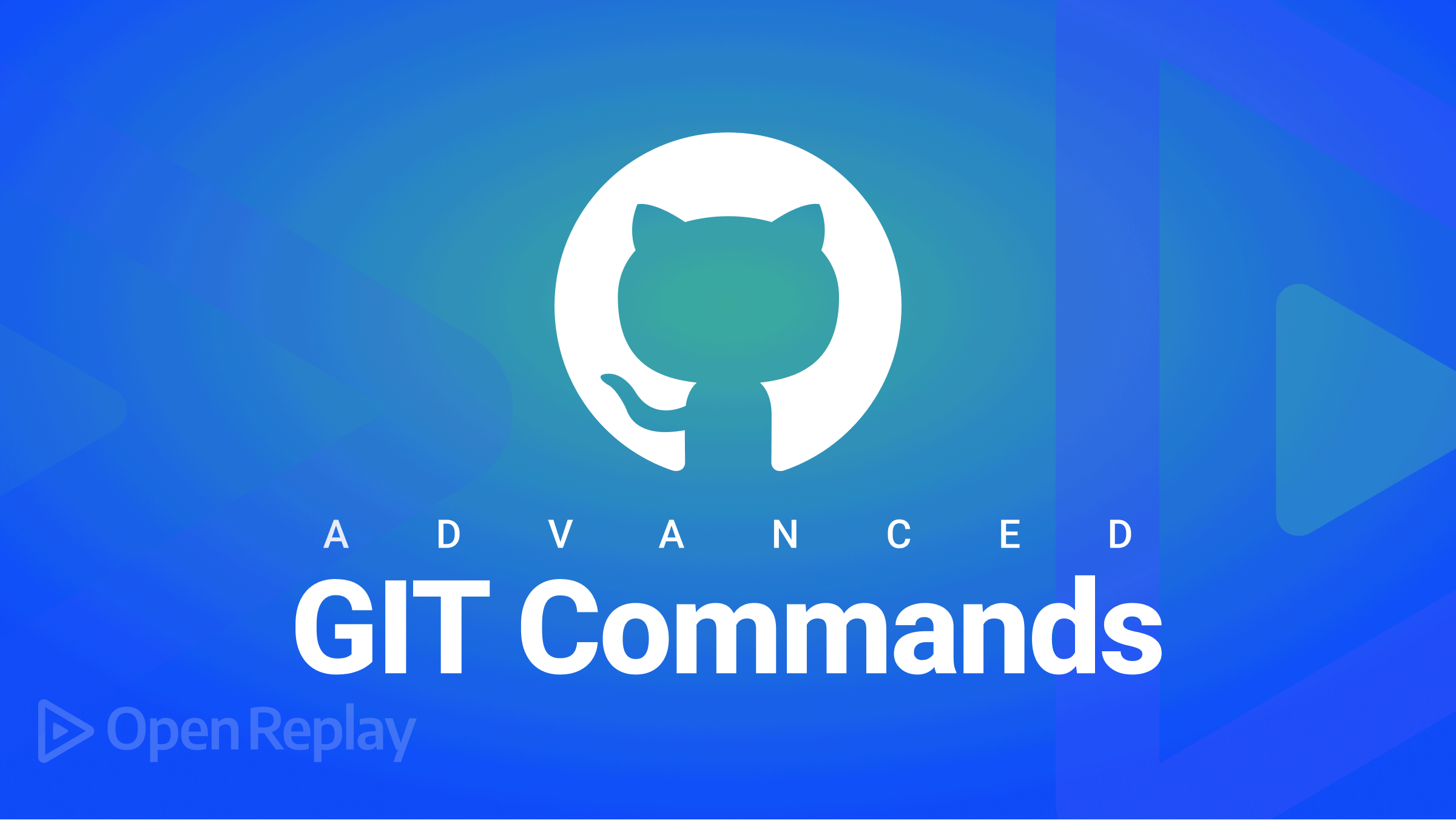 Git is a Distributed Version Control System that practices and records the tracking and modification of any files to the software code. Git is a widely used and essential tool, primarily if you work with a team. A Distributed Version Control System is a version control system in which the user/member/engineer has a working copy of the codebase and its history on their local machine. It means that members can work offline, split features into chunks, and work with them.

Git commands are rules given to track, store and modify changes to a repository. These commands’ purpose is to do everyone’s jobs easily, fast, in sync, and bring clarity.

To follow this article well, you should have a basic understanding of Git and have it installed on the system. To get started, you can check out this article Getting started with Git.

Let us jump right into the Git commands.

Git cherry-pick is designed to pick a commit from a branch and apply it to another branch. This could happen when a user makes a mistake by committing a change to the wrong branch. Rather than merging the whole branch, you can cherry-pick. This command is also useful for team collaboration. Different teams may need a commit. Git Cherry-pick helps with that. 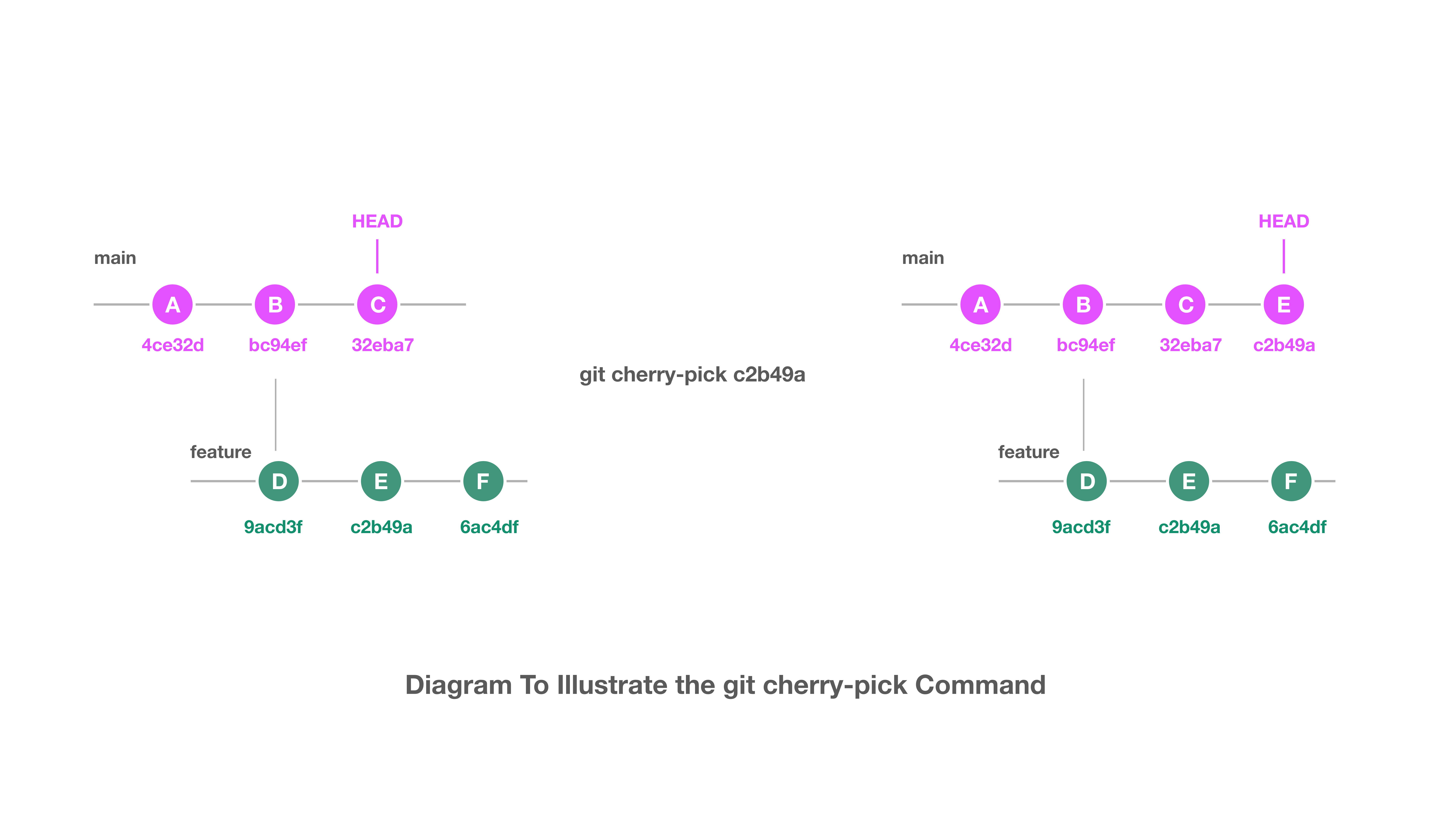 The commit ID is the commit hash key. It can be gotten when you run git log.

This command lets you edit a commit message before committing.

Rather than creating a new commit, it carries over the commit message from your branch to your working directory.

To dive deeper, you can read up on Git Cherry-pick.

Git Clean operates on or cleans the working repository by removing untracked files. For clarity, untracked files are files in your repository working directory that haven’t been staged or added to the version control using the popular command git add. Just running git clean will most likely throw an error because the command needs to be passed along with an option.

This command tells you what file would be removed without actually removing them. This is most definitely a good practice. It makes you quite sure about what files are going to be removed.

This command deletes an untracked file from the working directory. This doesn’t remove untracked folders or .gitignore files. A file path can also be passed along git clean -f.

This command forces the removal of ignored files. It is best practice to check what files would be removed by doing a dry run first.

Git commit takes and records staged changes(changes that have been added) made to a project. This change becomes the most recent commit in the local repository. Changes are staged using the git add . command. Also, note that using git commit does not automatically save to the remote server. It only saves in the local Git repository.

This command includes all changes to tracked files. It does not include untracked, those that haven’t been added using Git add . files.

This command combines the -a and the -m options to commit changes. This creates a commit for all staged changes and adds a commit message. This omits the git add . step.

For more on Git commit.

This command allows you to change and set Git configuration values and settings globally or locally(in a specific git repository), depending on which you prefer. Git config may seem like a beginner command, but there is no end to what you can do with it.

Globally, Git configuration is stored in the .gitconfig file.

This file shows the configuration already in place globally. It can be more, not just email and name.

This shows the user’s name.

Locally, the config file is stored in your repository’s .git folder.

The configuration file includes some information, like the URL of the repo and the branch.

This command writes the value <your_name> to the configuration user.name. Since it’s using the --global flag, it sets the value for the current operating system user. This username will be the commit author that will show up in your commits.

As an engineer, when any command sends me to an editor I don’t fully understand, I get confused, and it takes time to adjust. This command allows us to choose an editor of our choice.

The particular editor of your choice will always be opened when the git command is run. There are other editors from you to choose from.

This is a way to see if the changed or added settings are applied. The results would vary depending on whether you are in your local repo or you are global.

These are custom and temporary shortcuts that help increase efficiency. Again, this can be set globally or in your local repo.

So when next you want to add a file to the staging area, rather than using git add ., you can do git a .

The -unset flag can be used to get rid of a setting.

This removes the user name from the global config file.

—remove-section: removes a particular section from the file

This command removes the user section from the configuration file. To learn more, check out Git config

This command compares changes made in a file, commit, or between two branches. It compares changes between your working directory and the staged directory. “Changes” here is an important keyword. There has to be a difference between the changes in a working directory and the staged area; if not, there would not be output. Creating a new file and using the git diff command will output nothing.

The image above shows the difference between my staged area and my current working directory. In this article, we’ll dwell on a few lines.

This command shows the changes between your last commit and the staged environment. Your changes have to be staged(changes that have been added).

This command compares changes from your staged and unstaged environment with your last commit.

This command compares changes between two branches. Specifically, the commits of these branches as this command doesn’t check the staged and unstaged changes.

Git log is a prime example of a version control system. This command accesses and shows the history of commits gone through by the repo.

The image above shows:

It is worth noting that the records and history of a repo could easily grow into a large number, and soon become difficult to look through all of them.

This command is used to find a required commit and see the details.

This particular command limits the number of commits to be viewed. This is helpful when you have an idea of when you made those commits.

This command “pushes”/saves/uploads all of the commits that you have made in your local repository to a remote server.

Git push accepts options that specify where commits are pushed too. If the command line does not accept options about where to push, the current branch is determined so changes can be pushed. Also, the “remote_name” defaults to “origin”.

This is the same as git push but forces the push regardless of any non-fast-forward merging error that it throws.

This command deletes a branch. Specifically, Git is told to push nothing into a branch on a specific remote name, and this action deletes the specified branch.

Git Rebase is designed to combine and integrate changes between branches. It is very similar to git merge, and they just do it differently. Git rebase moves the entire working directory branch ahead of the main or master branch. This integrates all of the commits into the main branch. There won’t be any logs of the feature branch, and the logs will be modified after the merge. This method is cleaner and gives more clarity when running git log. It is therefore better to use git rebase when working on a private branch, when other developers don’t need the logs.

One Golden Rule for Git rebase is that you should never rebase your main branch into your <branch_name>. That will move all of the commits from the main to the front of your feature branch, which will confuse your teammates. So it is best to avoid that.

For this example, I am

The —hard option readjusts the changes and sets the HEAD to the position of the last commit. This also removes the available changes from the staging area. The new file that was added has been removed from the repository. This loss cannot be undone, so it is worth noting.

The mixed option is the default for the git reset command. With this option, the reference pointers are updated, the pending changes are taken back to the working directory, and the staging index area is readjusted to the position of the chosen commit.

With the --soft command, the staging area and the working repository aren’t affected, although the ref pointers will be updated.

For HEAD being updated,

This will shift the HEAD to the particular commit hash that was passed. These commands are sensitive, so if you are working with a team, they need to know if you are running any of these commands.

Git Revert could be easily called an undo operation, but that is not all it is. Git Revert removes the previous commit but doesn’t delete it from the history. Instead, it creates a new commit for the removed commit. It could be not very clear but let’s get right into it.

For example, a file was created, added to the staging area then committed.

Checking the history, we can see the commit there.

This removes the commit and saves “removing the commit” as a commit.

This command reverts the commit that was removed

Git log shows the commits created when the commands were run.

Check out Git Revert for more.

Git shortlog -s -n counts the number of commits made by an author.

This command counts the total number of commits in a repository.

This counts the number of commits in a branch. You will often have to check the complete name of a branch path by listing all the branches first.

Git Stash “stashes”/keeps/saves all of your uncommitted changes and cleans your working tree. This comes in handy when you need to work on something else, and you aren’t entirely done with the present task, or you don’t want to commit what you are working on presently. . You can always come back and re-apply/revert the stashed changes.

The image above shows the status of the changes made.

It is important to know that git stash saves:

This command stashes the untracked files.

This stashes the ignored files.

We have been able to discuss some commands and how to maximize them. I think it is fair to say Git is a vital tool to learn, which will help your productivity.

Thank you for reading!