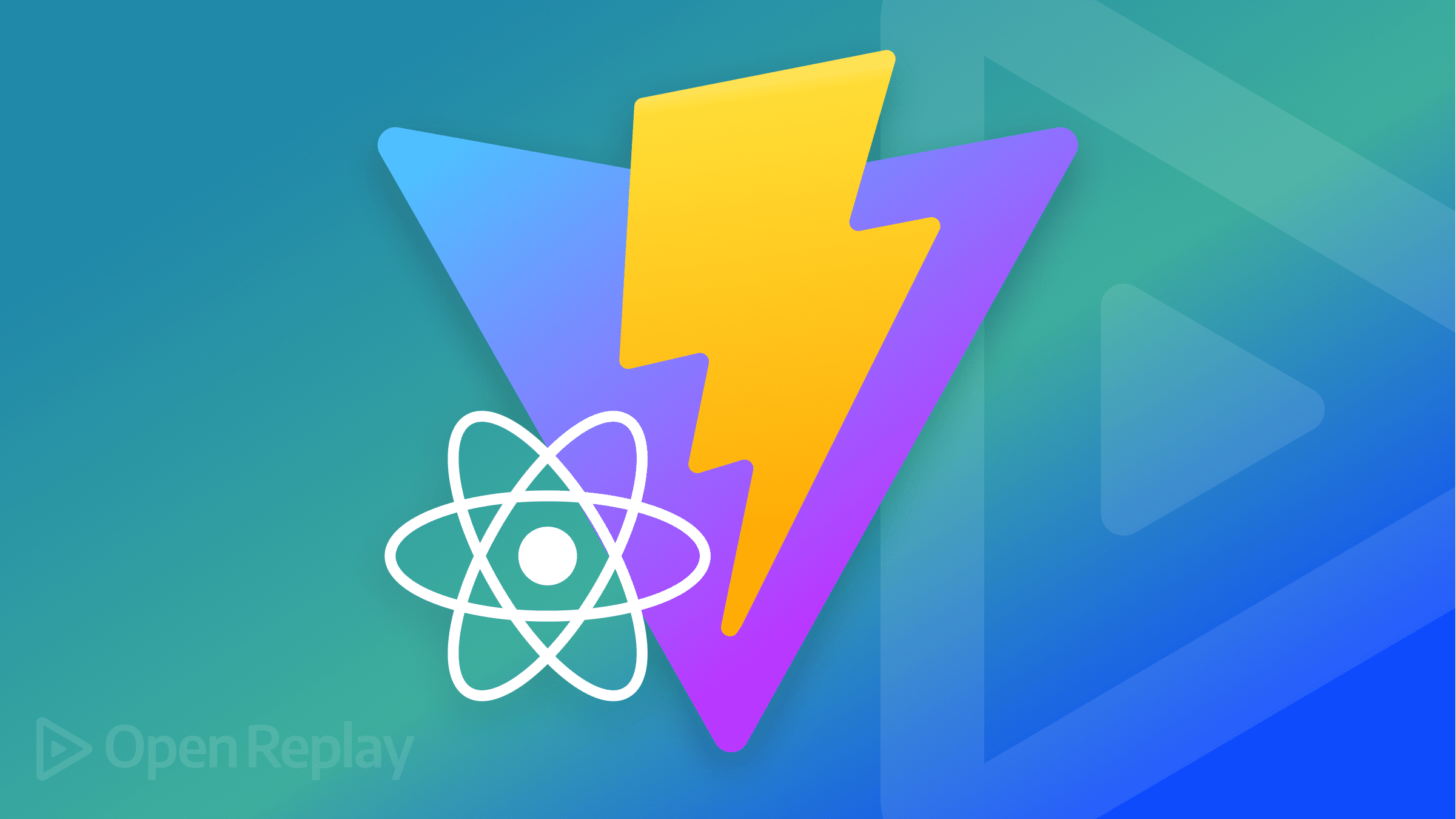 Vite is a JavaScript build tool that simplifies how you build your front-end web applications. Vite is made to speed up the build process and aims to provide a faster development experience for modern web apps.

A few features make Vite outstands its alternatives. These include:

Vite vs create-react-app: Why use Vite

With such amazing benefits, as a developer, you want to run front-end applications with Vite. Consider creating an app using React.js (a JavaScript library for creating front-end web apps). You will probably use the create-react-app command to bootstrap your React application. The command creates the project structure required to develop, build and run a basic React.js application.

Here the goal is to create a React app. Vite provides an equivalent of create-react-app. However, you get to make your application more powerful.

Let’s dive in and run React.js with Vite. Ensure you have Node.js runtime installed on your computer. Navigate to where you want the application to live and open the command prompt that point to that folder. Then initialize Vite as follows.

Go ahead and enter a name for your project. This will allow you to select any front-end framework on which you want Vite to run. In this case, go ahead and select React.

Most fronted frameworks run either on JavaScript or Typescript. Vite allows you to set this up right before your project gets created. In this case, we are running the application with JavaScript. If you want to use typescript, go ahead, and select react-ts as the framework variant.

With that, Vite will scaffold a react project within seconds. Go ahead and change to the newly created project using the cd command:

Then install the project dependencies:

Finally, run your application to test everything out:

And there you have your React app running on Vite. To access the dev server, open http://localhost:3000/ on a browser, and you will be served with your first React-Vite application. Right away, you can go ahead and start building on your application.

To fully understand which command to select for your project. Let’s compare the two based on how they scaffold the same project.

Go ahead and create an app using create-react-app:

Now go ahead and run the project. Change to the newly created project using the cd command:

Finally, run your application to test everything out:

Let’s now test how long it takes to run each app. So go ahead and the create-react-app server. Then rerun each server using the following time Measure command:

This takes about 7845 Milliseconds to start the server. However, this is not the case with Vite.

It took Vite about 825 Milliseconds to set the server up and running. That is considerably faster as compared to create-react-app.

Another thing you should note is the amount of disk size each project takes. Here is a sample of how these two projects compare in terms of disk sizes: 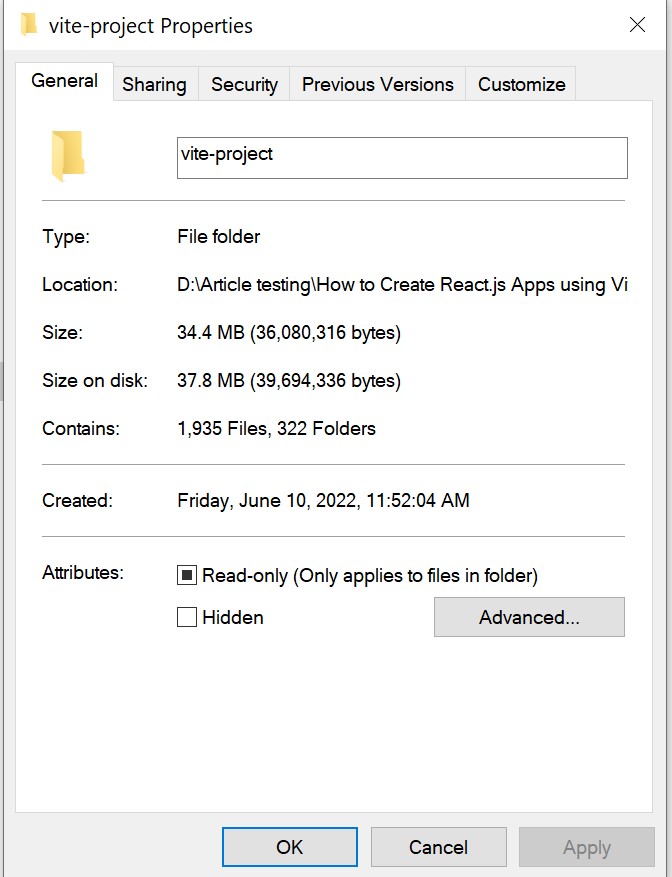 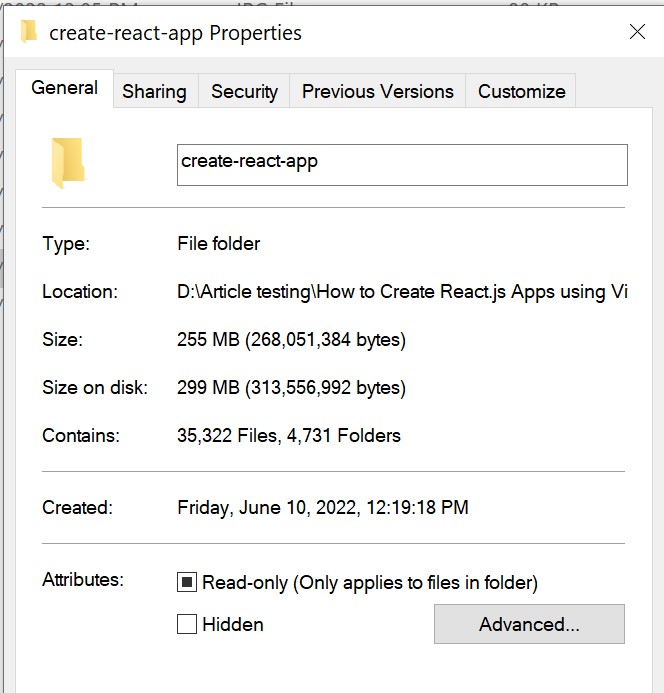 As you can see, Vite is the clear winner here, and the same applies to their build output sizes.

Also, when restarting the applications based on the changes you make. Vite tends to be faster, and changes will immediately reflect on the browser.

Migrating from create-react-app to Vite

Assuming you have a traditional create-react-app, let’s briefly discuss how you can migrate your existing create-react-app and use Vite instead. This way, you can take advantage of everything that Vite offers. At this point, you should have an existing React app. You can learn how to create a simple one here.

Once done, it’s time to introduce your Vite dependencies. Vite is used do development purposes. When adding Vite, ensure you add the needed Vite libraries as devDependencies, as illustrated here. You need two libraries. These are:

To install the above libraries, run the following command, ensuring you have the --save-dev flag to instruct NPM to install them as devDependencies:

The above changes should reflect inside your package.json file as such.

However, when using Vite, the Asset build system works differently. It treated static assets differently. PUBLIC_URL won’t work in this case. To solve that, Vite uses a Public Base Path (/). To implement this, navigate to the public/index.html file and replace all %PUBLIC_URL% with public Base Path. This should be /, and it should be implemented as follows:

Vite a great fan of .jsx. Ensure you rename your .js files to .jsx. Then edit the index.js entry point to point to the file .jsx file extension. So inside public/index.html add the following just <div id="root"></div>:

During development, index.html serves as your application’s entry point on Vite, a server. index.html is handled by Vite as source code and an access point in the module graph. This concept uses a “root directory”, where your server is served from. Therefore, go ahead and move the public/index.html file to the root directory of your project.

At the root directory, create a vite.config.js file ad add the following script:

Finally, update the running scripts inside package.json from:

To the following Vite commands:

To test your application, use the above Vite command. For example, to run your local development server, run:

Vite is now ready, and you can use its advantages alongside your React projects.

The main reason Vite is faster and more powerful in many aspects is the number of dependencies used to scaffold, build and run the app. If you navigate to each project’s package.json file. You can see a clear picture of the dependencies to run each app.

To conclude, Vite is a fantastic tool that you should consider when creating and building your front-end application. It is compatible with almost every front-end framework. Its powerful features will help you create and build applications faster and more lightweight apps.

A TIP FROM THE EDITOR: Want more on React and Vite? Don´t miss our earlier Building a React Application with Vite article, then!

Understanding the useId hook in React

Understanding the Template Element in HTML