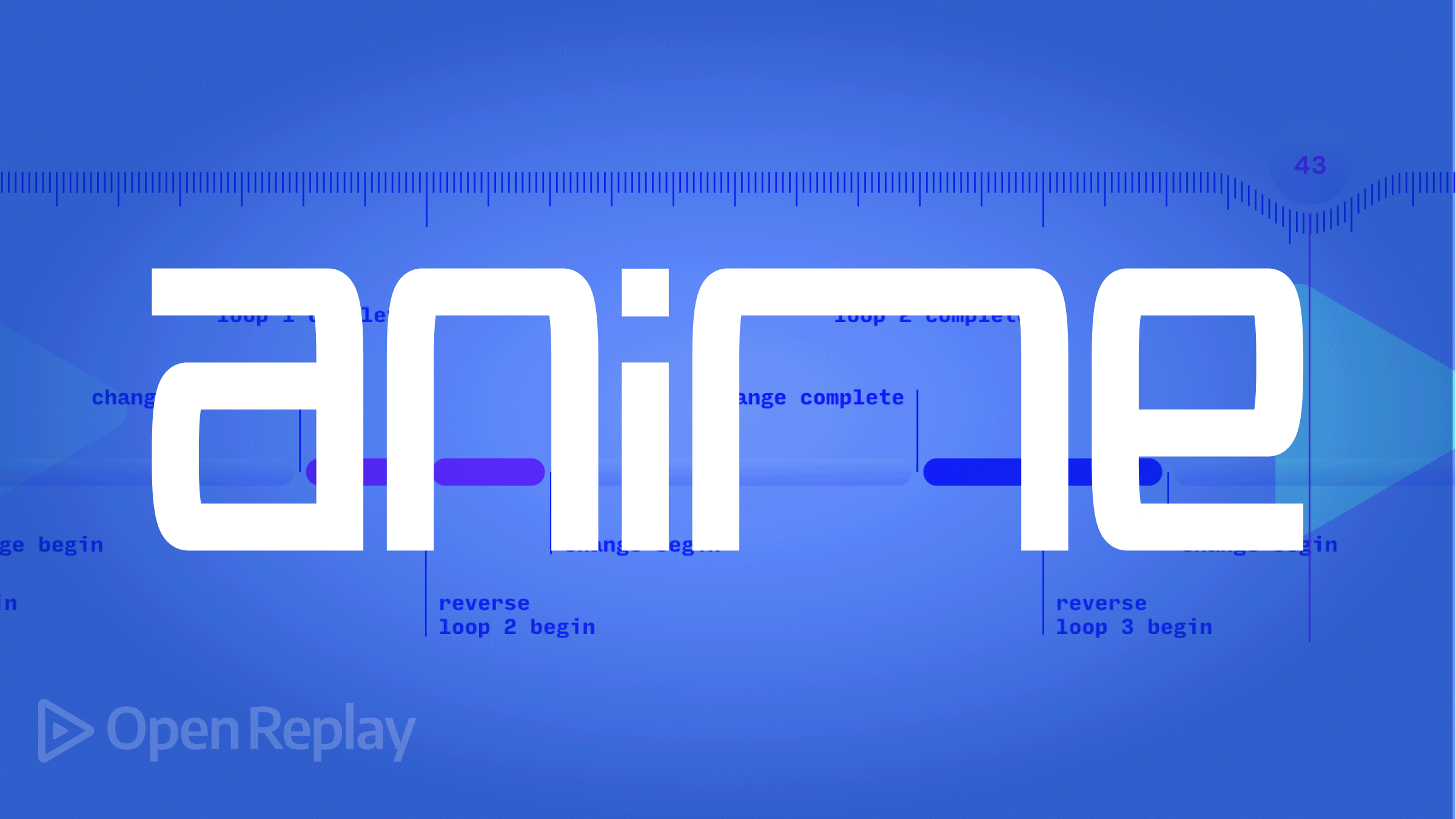 Micro-Interactions are just like other interactions with gadgets; they’re utilized to give users meaningful feedback because they must always be aware of the results of their actions. People tend to anticipate what will happen when they click a button, scroll down a page, add something to their cart, or swipe their credit card.

Let’s look at some of the beautiful examples of micro-interactions:

To get started with our project, we first need to clone our project starter repo. To do this, you have to run the following command on your terminal:

Once you are done cloning the repo, the next step is to open up the project directory on your code editor using the code . command if you use VS Code. Now run the `npm i’ to install all the dependencies we need to get our project up and running.

The next step is to run the npm run dev command to get started on our project on the http://localhost:1234 server. After running the project on localhost, you will notice that the project is responsive. But we need the starter code for our project, and we do not want the final branch yet. To get our starter project, you have to run the following command on your code editor terminal:

Once you have done that, run the command npm run dev to start the project again. The project will no longer be responsive as we have now switched to the starter branch. This is what our project should look like: 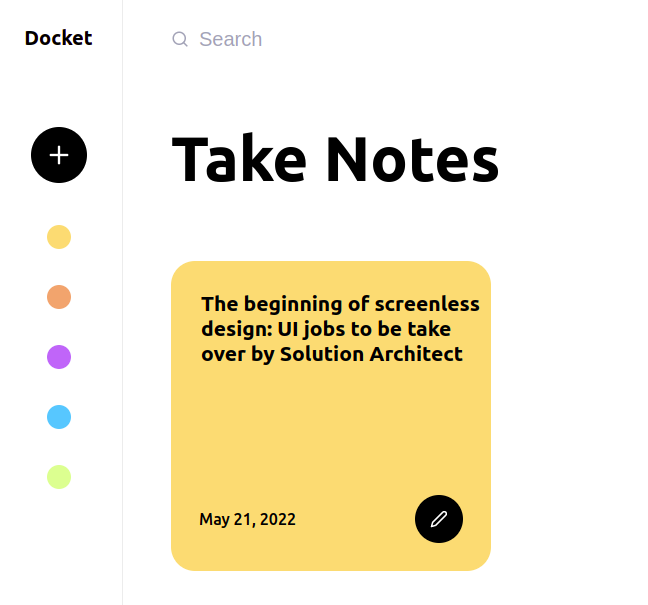 The first thing we want to do is create a scripts folder inside src, and we need to create a state.ts file inside scripts. In this project, we will use XState, a library by David Khourshid that allows us to create JavaScript state machines and state charts. This library works with several concepts:

Click here to learn more about the concepts of XState.

Going back to our project, let’s go into our state.ts file and edit the code to look like this:

First, we imported Machine from XState; then, we created a generic type for our TogglEvent, setting type to TOGGLE, and created our state machine.

A better representation of the state machine code above is the XState visualizer, which looks like this: 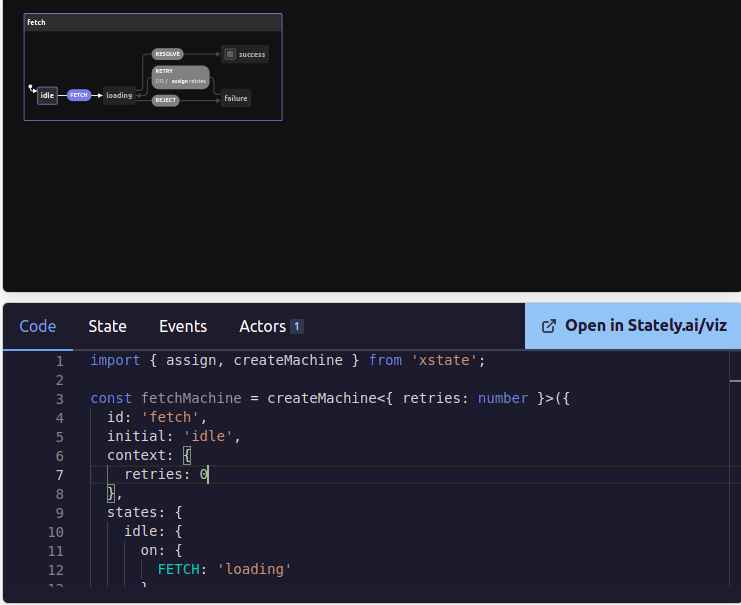 In the example they provided, a fetchMachine fetches specific data. If we look at how the code is broken down, they defined a fetchMachine at the top, setting the id to fetch and the initial state to idle. They also included context, which we didn’t.

If we look at the visualizer, which looks like a diagram, we are currently in an idle state. If we click on fetch, it will update our state to loading, where we have two options: resolve or reject. If we resolve it now, it will set us to the success state, ending our state machine cycle. If it rejects our request, it will then move to the failure state. Here we have two options: either retry or assign the retry context.

We copied and pasted our state machine into the XState visualizer, then clicked on Visualize to get the result in the image below: 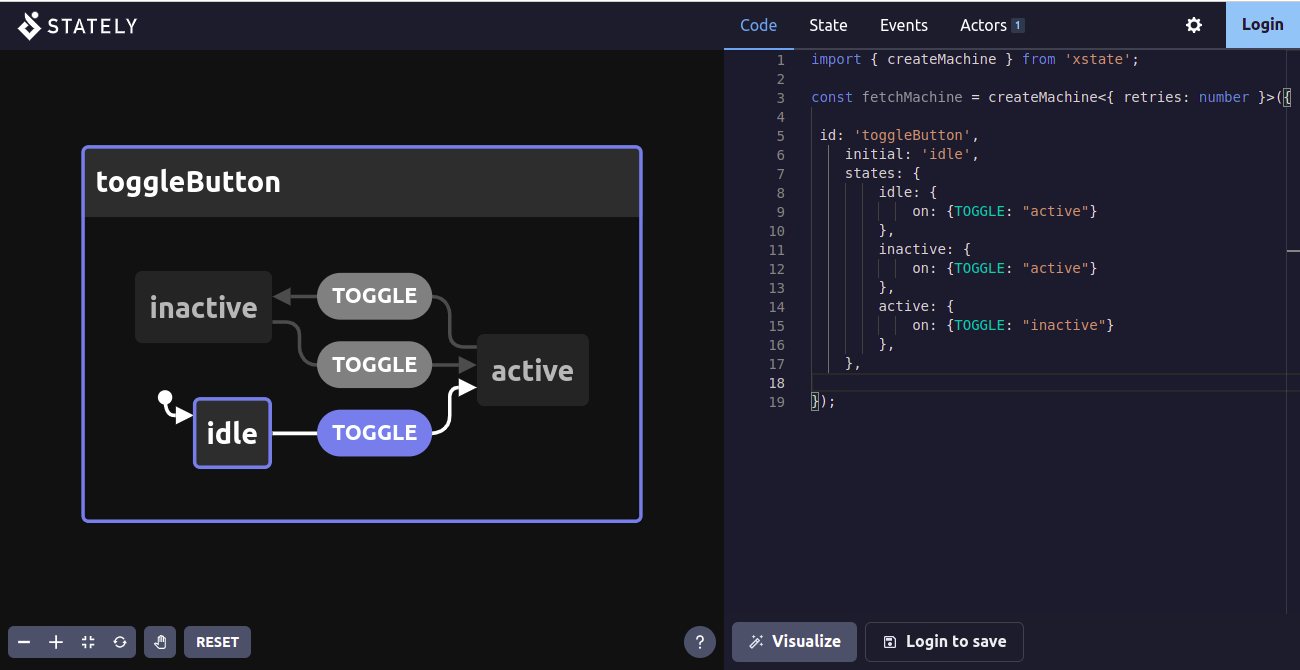 We are using the idle state because we don’t want any animations to occur on page load, and we only want to use it specifically if it’s inactive or active.

Going back to our project, let us go into our app.ts file and edit the code to look like this:

Here we created the variables for our button and our state machine. We also added a toggle function to toggle our state. An event listener was added to our toggle function, then we used the toggleService.send method, which allows us to define a transition of our next state, then we passed in our TOGGLE. To use our toggle function, we added it to our initialize function. Then we did the console.log(state.value); which will allow us to preview our project on our browser console.

In this section, we will rely on SVG filters to create the wobble effect in our animation. According to MDN:

The filter SVG element defines a custom filter effect by grouping atomic filter primitives. It is never rendered itself, but must be used by the filter attribute on SVG elements, or the filter CSS property for SVG/HTML elements.

In our index.html file, we add an SVG between our Nav and Header:

Inside our SVG, we used the defs element, which is used to store graphical objects that will be used at a later time. It will only return the objects if we reference them. We also added an important filter effect, the [feColorMatrix](https://developer.mozilla.org/en-US/docs/Web/SVG/Element/feColorMatrix). When working with color manipulation, the feColorMatrix is one of the best options.

Note: You can read this article to learn more about the feColorMatrix.

We switched our selectors height and width to 32px. Before we start animating, we must prepare our CSS for the selectors.

We want to hide all those selectors behind the plus button. To do this, we changed the margin-top to -24px. This is what our project now looks like: 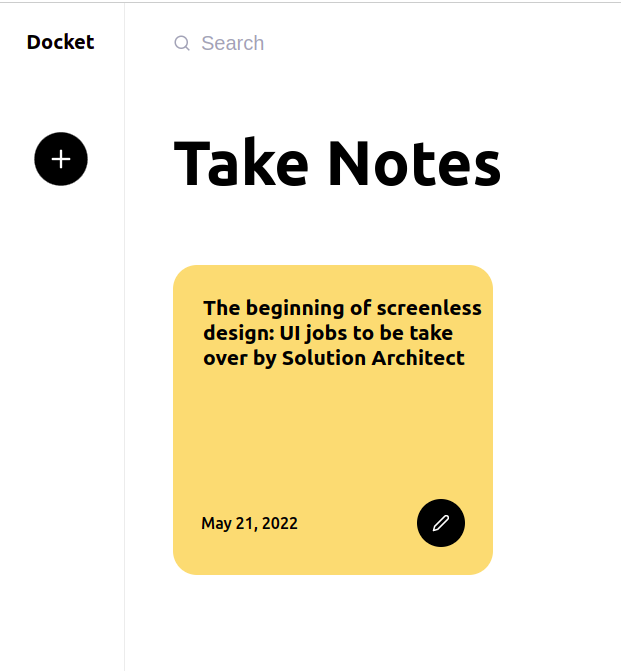 The selectors are now hiding behind the plus button.

Anime.js is a lightweight JavaScript animation library with a simple yet powerful API. It functions with DOM attributes, JavaScript objects, SVG, and CSS properties. With Anime.js, you can create simple animations that include the back-and-forth movement of objects or more complex animations that involve changing the appearance of a component through an action. Timelines, where you can create an animated chain of events, are another feature supported by anime.js. When showing multiple events at once, this is quite helpful.

The library has a basic API that allows developers to animate anything. Let’s look at some of its features:

Let’s go to our app.ts file in our project files, where we have already created the toggle state using XState. What we need to do next is use Anime.js to start animating our project. In our app.ts file, let us edit the code to look like this:

To get started with Anime.js, the first thing you need to do is run the following command:

In our code, the first thing we did was import anime from anime.js, and then we created a new function called animate where we declared a variable of tl, anime.timeline. The anime.timeline allows us to create a new timeline from the anime library. We also have our init function, where we passed in the state.value to our animate function. We also checked if our status is active; if yes, then run some animations, and if inactive, execute different types of animation.

Once we run our project using the npm run dev comma, this is the practical result:

We now have a beautiful micro-interaction. When we click the plus button, we see our selectors beautifully “wobbling” down.

This article taught us how to create a beautiful micro-interaction using tools like XState, SVG Filters, and Anime.js. With these tools and libraries, you can create micro-interactions on your project to improve user experience.

A TIP FROM THE EDITOR: For a different approach to animations, don’t miss our How to Add Animations with React Transition Group article.

3 different techniques to pass multiple parameters to the onClick event handler in React.js

Skeleton components help improve the UX of your application, learn how to implement them using React